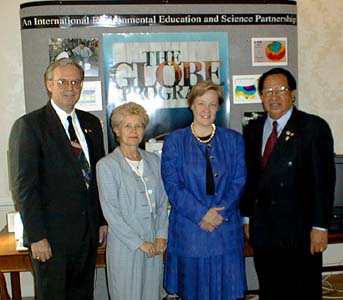 GLOBE was honored to be visited by Choctaw Tribal Chief Phillip Martin on May 7, 1997, and to have an opportunity to discuss plans for implementing GLOBE at eight Choctaw Tribal Schools in Mississippi. This partnership represents the first institutional involvement of Native American schools in the program. Under the leadership of Chief Phillip Martin, this initiative will become a model for involving other Native American Tribes in the GLOBE Program.

Officials at NASA's John C. Stennis Space Center are working closely with the Mississippi Band of Choctaw Indians on implementation of GLOBE. A September 16, 1996, ceremony held on the Choctaw reservation in Philadelphia, Mississippi, marked the initiation of the new partnership between the Choctaws and the GLOBE Program. Eight Choctaw GLOBE teachers received training at Stennis April 15-18, 1997. They will soon begin using the program in their schools on the reservation.