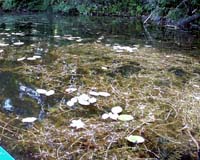 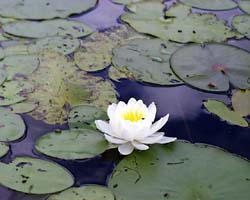 Had early American explorers known how to conduct GLOBE protocols, their expeditions may have yielded the wealth of information collected this summer by students from Fair Haven Grade School in Vermont. Eleven fifth and sixth grade students and four GLOBE teachers from Fair Haven spent five days kayaking on the Castleton River in an effort to survey the health and welfare of the ecosystem.

During the journey, students kept written records of their measurements and observations to be reported later to the GLOBE Data Archieve and on their own website at: http://www.vetc.vsc.edu/fhgs/CARPintro.html. In addition to conducting GLOBE hydrology and atmosphere protocols, students noted land cover, birds and aquatic life, and cleaned up trash along the river. The students' expedition was the first of what will become yearly trips to monitor and clean up areas along the river as part of their The Castleton Area River Project.

Although the Castleton River once suffered from exposure to industrial waste, the students found the river had rebounded, with the exception of problems caused by proximity to an old dump site Evidence of the dump was hard to ignore, as shown in this student diary entry from the excursion:

"[On the] site of the old Fair Haven Dump...the bank was disgusting. It was at least 100 feet high and covered with rusted car parts, furnaces, refrigerators, stoves, large pieces of metal, slate and other junk, some of which had fallen into the river. ... While at this site I took the water quality readings. The water conductivity was 300, which is extremely high. This reading indicates a significant amount of suspended solids. The pH measured 9. This is the first time we have ever recorded a pH other than six. I wonder if the trash had an effect on both the pH and the conductivity readings?"

But in another diary entry, it becomes evident that the trip was more than just hard work. "Today was extremely fun because we waded through the river, around three bends, in hopes of getting an idea of our position in relation to Hydeville," wrote another student. "Looking at the topographic map we estimated that our group traveled a distance of 3 miles. We exited the river at a rather steep bank where there was evidence of a deer path and a grassy area where they had bedded down. It was fun sliding down the hill and falling into the river."

GLOBE Teacher Christopher Stanton says both teachers and students found the trip very rewarding and applauded the students for working tirelessly in the field and at the computers," "We applaud them for the valuable work they have done and the stewardship they have shown," he said.

In another community effort with Fair Haven GLOBE students, Castleton State College and the Fair Haven Grade School Board of Directors hope to buy a wetland site that would be on the school grounds. College scientists and educators would help develop the site as an outdoor classroom for use by both the college and the grade school. The wetland area would allow consistent collection and reporting of soil, land cover, and hydrology measurements to GLOBE scientists.