While some kids want dessert after lunch, the fourth-grade GLOBE students at Eastbrook Elementary School in Indianapolis, IN, look forward to taking their GLOBE measurements. 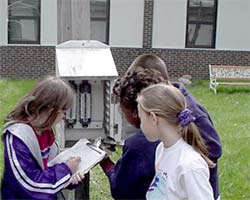 "GLOBE has been an inspiration for the students and me!" GLOBE Teacher Mary Lou. Feist says. "I appreciate how the GLOBE Program fits into our current curriculum and combines the use of technology with real-life activities for the students."

Ms. Feist's students have been among the most consistent and careful reporters of data since the program's start in 1995. Their care and dedication have earned them recognition not only from GLOBE scientists, but also from their local community.

Ms. Feist says she incorporates GLOBE activities into her math and science curricula, focusing on the observation, measurement, evaluation and recording of atmospheric data. All of her students are trained in the protocols and interested students then apply to become "GLOBE Lead Students." Fourth-graders who enlist to be GLOBE Lead Students write about why they are interested and are tested on the protocols.

Throughout the year, two "GLOBE representatives" from each of the schools four fourth-grade classrooms go out after lunch to perform the GLOBE protocols, lead by the GLOBE Lead Students, who have been chosen on the strength of their applications and their interest in GLOBE.

"This way, all fourth graders get the opportunity to actively participate in the GLOBE Program," says Ms. Feist. "By including a GLOBE Lead Student in the daily measurements, I find their measurements are more accurate."

As part of a special project, each fourth-grader has chosen a state in which to "specialize," and will be tracking weather data and contacting students in other GLOBE schools to find out more about his or her chosen state. Over the years, students have given presentations on their GLOBE activities to the school board, the PTA, and to students from other schools. Eastbrook's participation in GLOBE has garnered attention from local media and, perhaps more importantly, has had an impact on the students. "I have had former students return to our school and the GLOBE Program is often one of their fondest memories," Ms. Feist says.

But students aren't the only ones drawing attention with hard work and dedication to their GLOBE activities. Thanks in part to her GLOBE efforts, Ms. Feist herself has received such honors as Teacher of the Year for Pike Township, Teacher of the Month sponsored by a local radio station and a bookstore, and the local Wal-Mart's Teacher of the Year.