The experience of being an exchange student can foster love of learning other languages and cultures. When GLOBE students add hands-on science they get memories, skills and knowledge that can last a lifetime. So too, for parents and teachers.

Eight GLOBE students, sophomores and juniors from four high schools in the Merced Union School District in California and their teachers, also learned these lessons during an extraordinary two weeks of living, learning and gathering GLOBE data in a regional park in Mantova, Italy. The entire town was involved in an example of how GLOBE can help bring together a community. 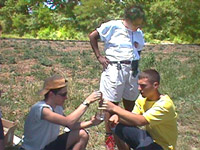 The exchange didn't end there: ten Italian students and their teachers from Istituto Tecnico Industriale Fermi returned with the Californians for two weeks to learn about life in America and to conduct GLOBE protocols in Yosemite National Park.

In both places, the GLOBE students studied the environmental impact of urban and industrial development on the parks. Three years in the making, the exchange was a cooperative effort between the Environmental Science Academy's (ESA) International Exchange with the University of California --a GLOBE Partnership, the GLOBE Program in Italy and a long list of public and private agencies in Italy and the US (see graphic below).

The mission of this ESA is to expose students who otherwise would not have the opportunity to travel abroad to a different scholastic and cultural environment to expand their scientific skills and knowledge through experimental research. The goals are to develop the global and cultural awareness of students and to reinforce their curiosity for learning in a new context. By either measure, the month-long, bi-continental program was a smash hit.

The American boys and girls stayed with host families in Mantova, a semi rural town of elegant old buildings in the south that fit agreeably with the farmlands of their home. In Mincio Regional Park, Italian and American GLOBE students launched a project aimed at reducing water consumption and fertilizer use by investigating soil and water in the fields and in the lab, using GLOBE protocols. Divided into groups, the students took atmosphere, hydrology and soil measurements centering on two rivers running through the park that also flow by power plants.

They examined the Mincio River from its headwaters in Garda Lake to the Po River, into which the Mincio flows. They found a 6-degree Celsius difference in water temperature before and after power plant discharges into the rivers. "They really got to analyze the river and how it changes as it passes through," said Sandro Sutti, Italy's GLOBE country Co-ordinator and a high school science teacher. "For us it was also a social experience because we had so many acquaintances and local boards and volunteers. It involved the major institutions in the town and the parents. Some of them are really interested in relating with America, thanks to GLOBE."

In California, the students working together conducted GLOBE hydrology protocols in the San Francisco Bay and the Merced River. They used GLOBE land cover and soil protocols to help gauge the effects of prescribed fires on the carbon levels of the soil in Yosemite National Park and collected GLOBE basic and advanced data on atmosphere. The Italian students stayed with families in Merced, camped in Yosemite, spent the night in UC Berkeley dorms and even slept aboard a Maritime Academy Ship in the San Francisco Bay.

Sutti, UC's Early Academic Outreach manager Ben Tucker and graduate student teachers Jarod Buna and Daniel Santillano spent several years organizing the events and exchanges. "We had to build confidence and trust [then] we took them to Italy," Tucker said.

Added Jarod: "At first we asked them to draw what a scientist looks like. They all drew white-bearded men with glasses. No one drew African-Americans, Hispanics or women. Now the students have formed a school club, the Environmental Wolf Pack. It has had a trickle effect. They're starting to see themselves as scientists. They recruit their younger brothers and sisters to GLOBE. They not only have confidence in leaving Merced; they have confidence in themselves. Word of mouth turned the kids around."

And UC student teachers like Jarod and Daniel - as well as the state science and math curricula also benefit from GLOBE, according to Tucker. "We are improving the teaching and learning of science. We are increasing teachers' professional development, student learning and enriching the curricula, " Tucker said.

Such a long-term approach has served the GLOBE Partnership well, he said. "The pipeline we started at the top, the high school level. But it's very important to move down the pipeline to the middle school and elementary school level so that students really have the basic skills in math and science so they can take advantage of all the GLOBE protocols when they hit 9th grade."

Many of the eight students' younger siblings are lining up to participate in GLOBE as they approach high school and most dream of going to Italy.

"We can learn a lot from American institutions but we can also teach them, thanks to GLOBE," Italy's Sutti said. "It will really change a small town like mine. It really is an outcome of GLOBE, a result. We are looking at science, at educating and this social outcome is something we didn't expect. My life has changed; their life has changed. It is a great consequence."