Sixty (60) GLOBE students and their teachers celebrated nine months of intense, competitive GLOBE measurement gathering and data entry with a day-long excursion to a farm high in Switzerland's Bernese Alps and the award of new computers. The goal of the competition was for 13 participating Swiss schools to collect as much hydrology or atmosphere GLOBE data during the nine months of the school year as possible and enter it into the GLOBE database. The prize was a new Internet-ready computer donated and installed in the classrooms by Swisscom, the nation's largest telecommunications company. 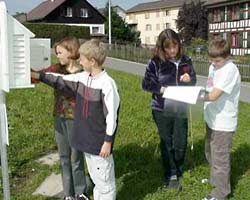 "This competition was an ideal way to mobilize large numbers of GLOBE schools, teachers and students in Switzerland. We wanted them to learn through experience that their hard work and commitment to GLOBE on a daily basis pays huge rewards to scientists around the world who rely on GLOBE data to verify Landsat images and to provide data for long term studies of the Earth's climate and water resources," said Ruedi Schluep, County Coordinator for GLOBE Switzerland.

"The persistent, consistent data collection by these Swiss students results in data that are especially valuable for research," said Dr. Dixon M. Butler, Deputy Director and Chief Scientist of The GLOBE Program. "They have set a wonderful example, and it is terrific that their hard work is recognized and rewarded." 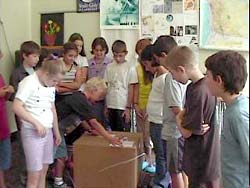 Hosted by farmer Stephan Thalmann and his wife Christine, the students and teachers enjoyed a walk around the farm and a traditional, hearty lunch. The most anticipated highlight was the announcement that three schools had collected and entered all the possible data and were winners: Primarshule Trittenbach in Tagerwilen, GLOBE teacher Silvia Gysler; Primarshule Neufeld in Thun, GLOBE teacher Thomas Baumann; and Ecole Primaire in Martigny, GLOBE teacher Jean-Jacques Mathey.

"Collecting data during bad weather conditions is not fun but now we have seen that it was worth it," said one sixth-degree student. "We are happy with our new computer and we are very proud because other classes, the principal of the school and the newspapers congratulated us for our great effort." A fourth-degree student summed it up differently: "We wanted to win, that's why our efforts have been extreme."

Nine months of non-stop GLOBE data gathering and entry was both a challenge and a joy, winners said. "To participate in this competition was a great challenge for my class," Gysler explained. " The kids realized that GLOBE is not only a small project. GLOBE is important and our efforts are esteemed by national and international experts and organizations."

"Collecting data in the field let the students forget the hard schoolwork," said Mathey. "They feel very free and relaxed." Others also realized the importance of the GLOBE work. "During a study week out of town, it was the kind property manager of our school who recorded the measurements," Baumann said.