More is known and more is being learned about the waters of Bahrain, Jordan and Lebanon, thanks to the efforts of GLOBE students who are conducting the Middle East Hydrology Project. Through the project, developed by the participating countries, secondary school students are using GLOBE hydrology protocols to compare seawater quality in waters of the Arabian Gulf, the Red Sea and the Mediterranean Sea, and to determine the effects of pollutants such as sewage and industrial waste on sea water. The students are taking measurements following the GLOBE temperature, dissolved oxygen, transparency, pH, salinity, and nitrates protocols. They have learned not only about the marine environment in their region of the Middle East, but about the scientific process as well. 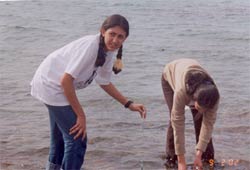 "The students did everything, and they gained a lot of insight," says Zakeya Ali, Bahrain's GLOBE Country Coordinator and one of the coordinators of the project. "It was a very valuable experience all around, because they discussed the weakness of some of their methodology and are going back to correct it. And they have a chance to work with other cultures."

The students divided the waters into four coastal types: Industrial, Touristic, Urban and Ecologically Protected. For example, in Bahrain, students have studied the waters off Hawar Island and Budiya Shore as well as the water under the new and old Muharraq Bridges. Most of the comparative study in Bahrain centered on shores that were exposed to wind and waves versus protected shores.

In Lebanon, students studied two sites in Beirut: Karantina, where the River of Beirut enters the sea, and Ramleh Baydah, the only spot in the city where residents go swimming. The Lebanese students also studied two less populous sites south of Beirut: Khaldeh, a less inhabited area along a rocky coast, and Jiyeh, a small village with a sandy coast and green plants along the shore. 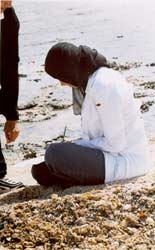 Finally, in Jordan, students took samples from the Red Sea, or Sea of Aqaba, off the Mediterranean Sea. The city of Aqaba is not only a popular tourist destination, but also has become economically important to the region and has undergone many changes in recent years.

In fact, the Aqaba Special Economic Zone Authority sponsored the Jordanian students' efforts because of its interest in their results. Jordanian students will also share the data from the regional study with the General Corporation for Environmental Protection and the Royal Geographic Center. Officials from both the private and public sectors in other countries are also interested in the students' work.

Jordan hosted the first hydrology workshop in February, where participants learned the protocols, chose their sites and defined their goals. Students then collected samples, made their measurements for four months and reconvened in July in Lebanon to discuss their findings. Officials from GLOBE Egypt went to that workshop to observe. In February 2003, Bahrain will host another meeting, where participants will meet again not only to further discuss their hydrology results, but also to plan their next effort: a regional land cover MUC and soil study-a-thon. The success of the Middle East Hydrology Project and the enthusiasm of its participants have GLOBE partners in the United States, Russia and New Zealand eager to join the regional share-and-compare of data, according to Heba Al Aqrabawy of GLOBE Jordan, who also coordinates the project. 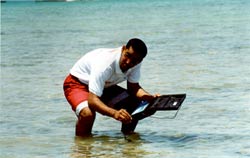 "The students have shown a great interest in the research process itself, studying their surrounding environment, which they interact with every day," says Al Aqrabawy. "[This] also opened the field for more research in other GLOBE protocols locally and regionally."

Raouf Dabbas, Jordan's GLOBE Country Coordinator and president of the Friends of the Environment Society, said he has been inspired by the young people's study and exchange of information on the environment. "This is what we have been engaging in since 1997 in Jordan under the GLOBE Program. GLOBE students are monitoring, analyzing and formulating scientific conclusions based on their local, regional and international dialogue with other GLOBE students and local scientists. This is truly the way forward to a sustainable future."