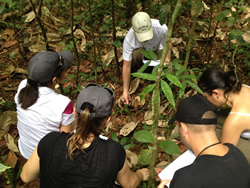 One of the goals of the Academy was to model field-based research techniques applicable in any ecosystem in hopes that participants would be inspired to return to their communities and implement similar experiences with their students. Specifically, over the course of the Academy, EPI staff led the group in conducting descriptive, comparative, and correlative investigations, all within an inquiry-based approach to science.

Highlights included a compelling presentation in the Tirimbina Biological Reserve, where biologist Eugenia provided information about bats living in the area. After wrapping up her slideshow, her assistant Raul emerged from the woods with a few bats that he had caught earlier that evening in mist nets. Participants were able to observe the bats up-close, dispelling many myths about these beautiful mammals.

After two days at Tirimibina, the group traveled to the Pacuare Nature Reserve on the Caribbean coast where they continued their research investigations, including working with endangered Leatherback sea turtles. The time at Pacuare culminated with a discussion about how participants might develop a regional research project geared at helping students better understand effects of climate change in Latin America. 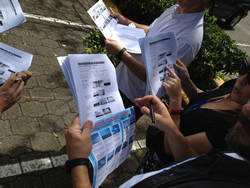 In an effort to provide participants with a common methodology to conduct their regional project, EPI staff, in conjunction with GLOBE Country Coordinator Roberto Quirós Araya, introduced GLOBE Cloud Protocols such as Cloud Cover and Cloud Type. Participants enrolled their schools in the GLOBE network and practiced uploading GLOBE data and accessing the GLOBE database.

The Second Annual Latin American Educator's Academy helped establish a network of dedicated science teachers across Latin America interested in improving their ability to teach inquiry-based science, and dedicated to working together to use GLOBE protocols to help students better observe and understand their region. According to GLOBE Trainer Joshua Klaus, "The Academy helped create a passion and appreciation for continuing to engage students in field-based activities that help them better understand and value their shared world." There are already discussions taking place about replicating the Academy in other countries in Latin America and EPI hopes to continue to lead rewarding experiences like this in the future.