Campers will Collaborate, Connect, and Collect Data in "GLOBE Goes to Camp" Pilot 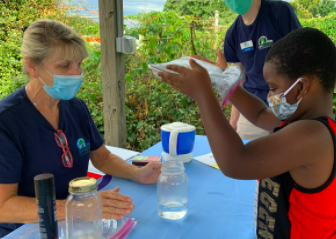 Members of the NASA Langley GLOBE Partnership will be spending the summer working with 12 summer camps in the "GLOBE Goes to Camp” Pilot. Campers will have the opportunity to connect with NASA scientists as they take on the role of a citizen scientist collecting local environmental data. By participating in this NASA camp experience, campers will gain valuable STEM learning opportunities designed to bridge classroom learning with real-world application.

As part of the experience, campers will be able to collaborate with other campers from each of the different camps participating in the pilot, learning not only about their local data, but also gaining perspectives related to data being collected by camps across the United States. One of the goals of this pilot project is to establish NASA GLOBE Camps across the United States that can work together with the NASA Earth Science Education Collaborative (NESEC) and the GLOBE community to broaden access to GLOBE resources for all learners, while ensuring that the resources being developed by the NESEC team address the needs of local camp communities. Part of this endeavor will incorporate GLOBE training for the various members of the camp staff.

For information regarding “GLOBE Goes to Camp” contact Tina Harte.