Did the El Nino Event Impact Our Temperature and Precipitation in Nov., Dec., and Jan.? 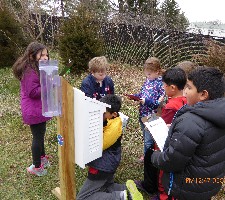 We noticed that we were having warm weather around Halloween, and we wondered why the weather seemed to change. We learned about a weather event called the "El Nino" that might change our weather this winter. We decided we could collect our own temperature and precipitation data using GLOBE protocols, and supplement that data with data for the closest airport to us that the National Weather Service collects. For the months of November, December, and January, we collected data, and in February we worked on analyzing the data, writing our research report, and communicating our findings to each other. We are planning to have a school-wide assembly and have invited Jason Samenow, a local meteorologist, to come speak and hear the results of our research. He said he would come!
Return to Student Research Report Listing