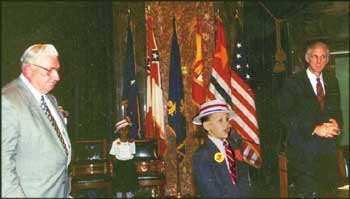 A group of fourth-grade students from Louisiana are faithfully reporting their measurements and observations to the GLOBE Study Data Archive, but they aren't stopping there. GLOBE students at Phoenix Magnet School in Alexandria are taking their findings to City Hall and even to the Louisiana State Legislature.

After hearing from the GLOBE students, Alexandria Mayor Ned Randolph committed to work with them to stop coastal erosion along the Gulf of Mexico and issued a proclamation specifically honoring the GLOBE students. The Louisiana Legislature also passed a resolution recognizing the kids as the state's "Youngest Politicians."

GLOBE Teachers Norma Stigall and Vickie Smith find their students are highly motivated by their GLOBE studies and have especially enjoyed sharing their lessons with their elected officials on a number of topics. "We work as a GLOBE class," writes Cris, a fourth grader in Mrs. Stigall's class. "We worked the National Science Convention as Louisiana's Youngest Politicians. I have spoken to the State Senate and I am nine years old. I am doing a web site on birds in Louisiana."

The GLOBE students are also partnering with their local U.S. Forest Service office. Kier Klepzig, a research entomologist with the Forest Service, works with Mrs. Stigal and her students on their GLOBE activities and has been impressed with their dedication.

"I'm an advocate of trying to get field science into the classroom," Dr. Klepzig says. "GLOBE excited me when I saw that the kids would actually contribute data and would be able to appreciate the value of sampling data points."