Students and teachers from five Latvian GLOBE schools participated in the Second GLOBE in Latvia Learning Expedition, in August 2004. Collecting environmental data was only a portion of the activities; students also had the opportunity to work with local scientists, learn about their natural history, and, of course, have fun! School teams also took turns writing up journal entries of the day's activities - a great way to include language arts into GLOBE activities! Below are the journal entries of 5 teams of student scientists while on their expedition. 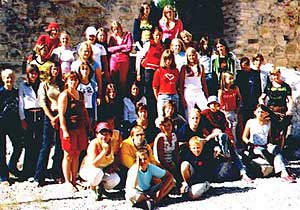 The main object of the first day was the North-Vidzeme Biosphere reserve. Our guide was hydrobiologist Andris Urtans. We received much interesting information on this excursion:

We also enjoyed the very beautiful sea shore in Salacgriva!

Our main task for this part of the day was "hunting" for macroinvertebrates in Jaunupe - we caught many of these small animals with special nets, counted them and put them back in the river. During these investigations we realized that the water in this river is slightly polluted. We also discovered another interesting fact - if there are red patches on the stones (a species of algae) it indicates the presence of a high level of oxygen in the water.

We also visited a cave at the banks of the Svetupe River which was used as a sacrificial place for people during ancient times.

In the evening participants could swim Lielezers Lake and enjoy dinner at Cafe "Ezermala," in Limbazi. Schools groups also introduced each other and played football.

The day began with hydrology investigations at Brasla River near Straupe. Una Fogele, a scientist from the Latvian Environmental Agency led these investigations. She showed us how to get the samples correctly and how to anylize the water quality.

We then drove a long distance to Zalaiskalns (Green Mountain) where we collected atmosphere data - clouds and temperature. We learned that we could not measure current temperature near big trees or human bodies or on a hot surface because all of these objects could affect the accuracy of the measurement. There was a beautiful view from the hill of the lake. We began to fill in the atmosphere investigation worksheets which we will continue during the next few days.

On the way to Madona we stopped for a swim in Alauksta Lake. Our final destination for this day was Lazdonas Primary School. We strolled along a nature trail made by pupils of this school. The teacher first described the idea and history of this trail. There were beautiful wooden animals made by pupils all along the trail and they fit very well in the surroundings. On the way we met Mr. Paganel, who had lost some very important things and asked us to help find them. He gave us some GPS units and coordinates. It was not easy but finally we found some sausages and sticks and we roasted sausages on the fire!

In the morning, everyone was very sleepy and only a few faces showed very weak smiles. The sun was shining but it was hot and everyone was tired. After breakfast we drove to Teici Natural Reserve, which is very big marshland. We called it the "expedition of fear". Our guide, Atis, led us to the swamp. We used a tiny foot-bridge with many pools beside it! There are many owls living in the marshland and some of them are quite angry (just a small joke)! There are also 7 wolves living near swamp, and snakes and lizards too. But then we met beautiful butterflies!

We stopped beside Lake Isliena. It looks like blue eyes and the Sun reflected like sparkles of joy! We collected coordinates, water temperature, pH, and conductivity data. Then we climbed a 30 meter high tower and had a beautifull view of the swamp, lakes and small woods. We were a little tired from this 7 km walk and everyone was happy to return to the bus!

During the night we had the most beautiful event of the day - iron-fall, like fireworks!

We woke up very early. After breakfast we crossed Daugava River and drove along the river until we reached Staburags (it was a very famous cliff before it was flooded by Plavinas Hydro-electric Power Station).

We met very nice people - writers Mara Svire and Vladimir Kayak, who live very close to Staburags. They told us a lot about the famous cliffs. We then collected hydrology data in Daugava River. After we we finished we drove to the old castle ruins Koknese, which is just on the opposite side of Daugava River. First we had a group photo, had a little walk around, and then continued on our way to Skriveri Secondary School.

After dinner we visited Skriveri Dendrological Park where student Atis Bickovskis told us the park's history. There are many very old and very rare species of trees.

Later in the evening we had a "night adventure hike" in the surroundings of Skriveri. It was very dark and we were afraid of dogs in the woods! But luckily we found the right way and were happy, but tired!

It's 24.00 and that means it's a new day, the last day of our expedition. Just now the "night hike" is happening. The firstgroups have already finished, and are waiting for the last ones. We are tired but very happy, because we found the school! We were lucky because Skriveri students were in our team. When all the groups have finished we will make our presentations and go to sleep.

Some of participants got up very early in the morning - at 8:00. Enough sleep!

After breakfast we went to Skriveri Science Centre, where doctor Janis Vigovskis showed us how scientists work. We visited the soil investigation laboratory where soil is analyzed, then visited a garden, where we dug a big hole. Everyone was able to dig! We needed to dig a hole about 1 m by 1 meter and our boys succeeded very well!

We determinate the texture, structure, and color of the different soil horizons. Gunta, our group leader, tried to put everyone in the hole! We also looked for different plants in the garden.

This was the last task in our learning expedition. Everyone received certificates and the expedition was finished!

Everyone looks forward to meeting new friends again next year!

Thanks to organizers for 5 unforgettable days!