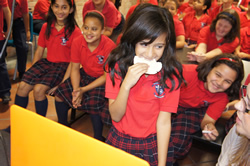 At the 2012 LAC Regional Meeting in Santo Domingo, Dominican Republic, a new collaboration was created, allowing students from three different countries to connect and share foods from their respective countries. GLOBE Country Coordinator for the Dominican Republic, Ms. Lorraine de Ruiz-Alma, and Peruvian Master Trainer Ms. Claudia Caro, organized the regional Food Project by extending the invitation to teachers from Cuzco, Peru; Santo Domingo, Dominican Republic; and Ushuaia, Argentina. Students were asked to study plants and foods that are indigenous to their countries and share their findings through a Skype conference with their peers in a different country. 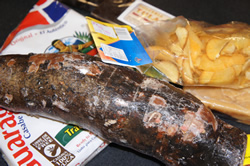 Students examined the environment in which these plants were found and collected data using GLOBE protocols. The students determined the best characteristics of the climate and environment that made their selected plants and foods grow in optimal conditions. Students also learned about the conditions that hinder optimal growth for foods such as abnormal soil pH, inadequate rainfall, among other variable.

Using GLOBE protocols such as soil characterization, soil pH, precipitation, air temperature, as well as various land cover protocols, students were able to incorporate environmental science to their everyday foods. Since they were conducting their study during American Indian Month, students also looked at the historical importance of food in the diet of Native Americans prior to Columbus' discovery. Students enjoyed tying historical facts and scientific data into each food item they were investigating. 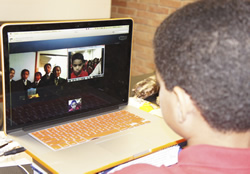 Students from the Dominican Republic presented their findings on maize, plantains, bananas, sea grapes, almond, rice, avocado, cassava, guava, red beans, peanuts, cocoa, and potatoes. One student expounded on the history of maize and how it was an important staple for the Taínos, pre-Columbian inhabitants in the Dominican Republic. Another student ate cassava bread, showing the viewers the size and color, and describing the texture. Although it is called "bread," the hardness is more similar to that of a cookie. Students from Peru shared about the potato, quinoa, and aguaymanto. 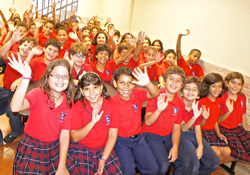 Ms. Ruiz-Alma stated that "students proudly shared that not only are Peruvian potatoes appreciated in global cuisine, but they also saved many regions from starvation, especially during wars." One student presented a variety of potato that is used in making potato juice, similar to orange juice, and talked about its health benefits.

Ruiz-Alma said that "the students had a lot of fun working on this project and they enjoyed learning about geographical differences that affect plant and food growth, and the importance of keeping those conditions at optimal levels. This ensures food production for the country and also improves economic prosperity as those products are exported globally."

The second video conference planned for the project will include a school in Ushuaia, Argentina, in 2013.

Extraordinary Enthusiasm for The GLOBE Program in The Dominican Republic!