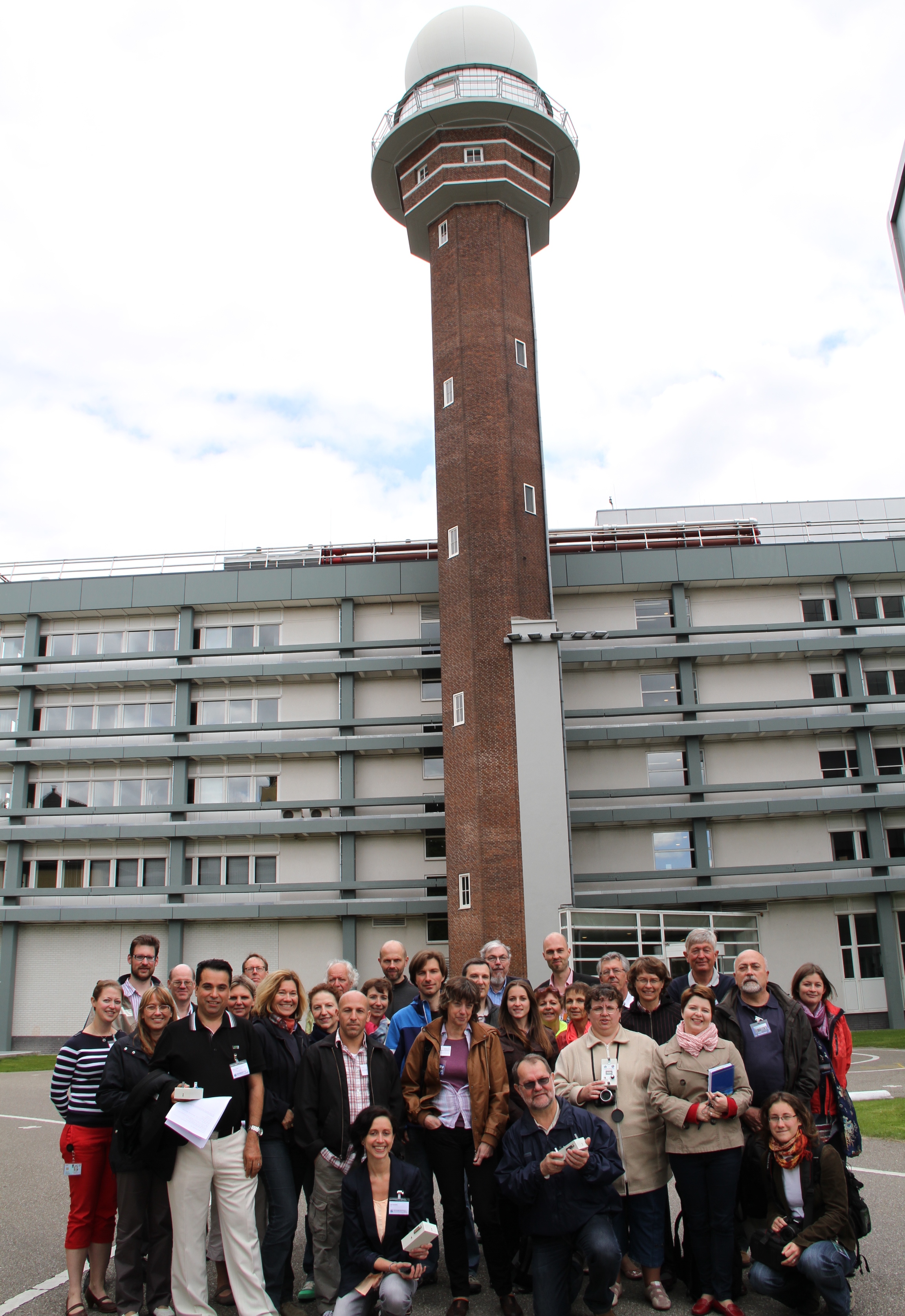 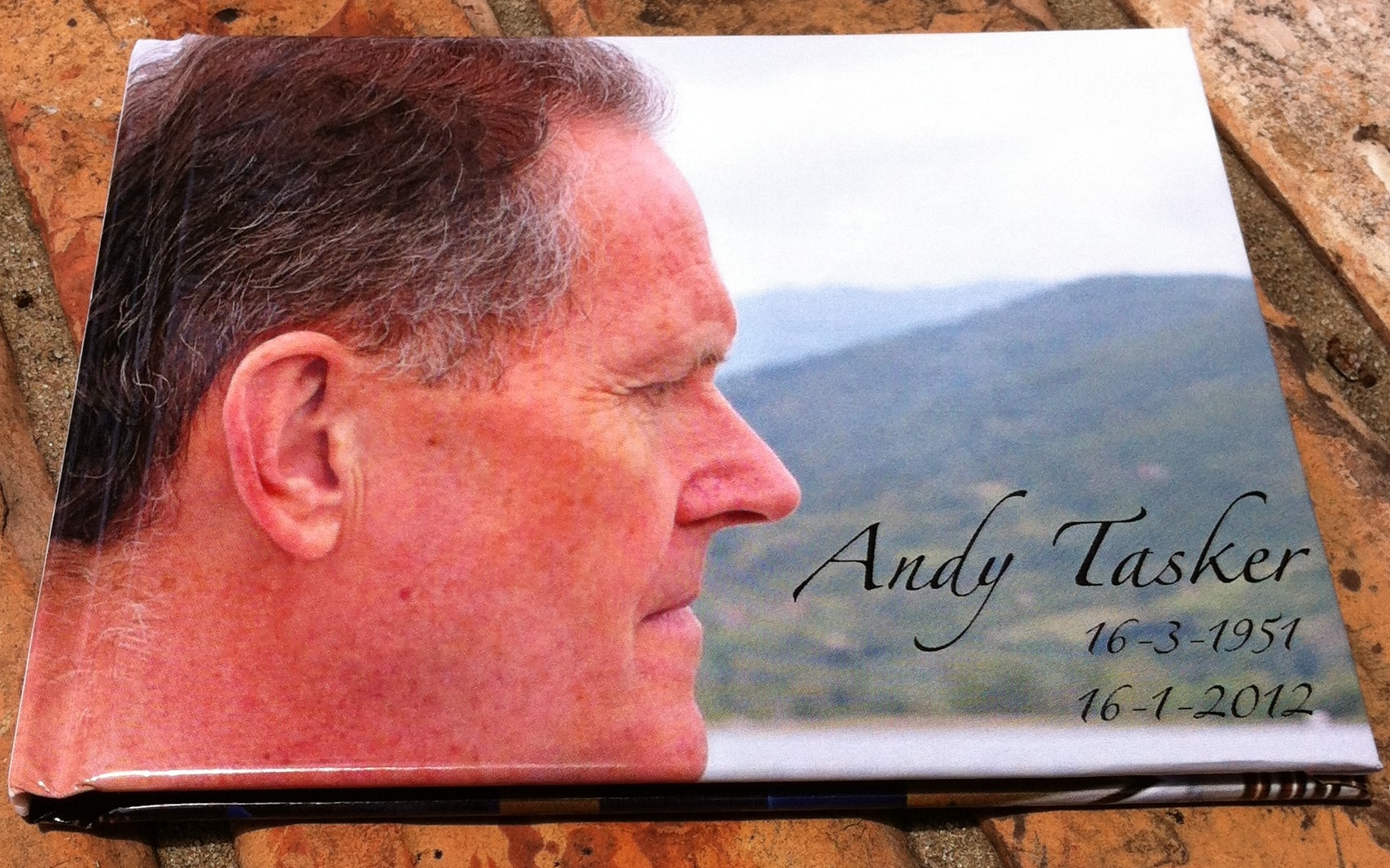 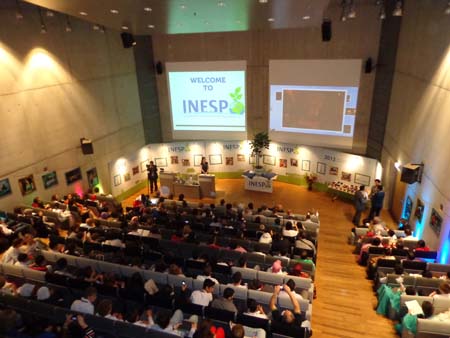 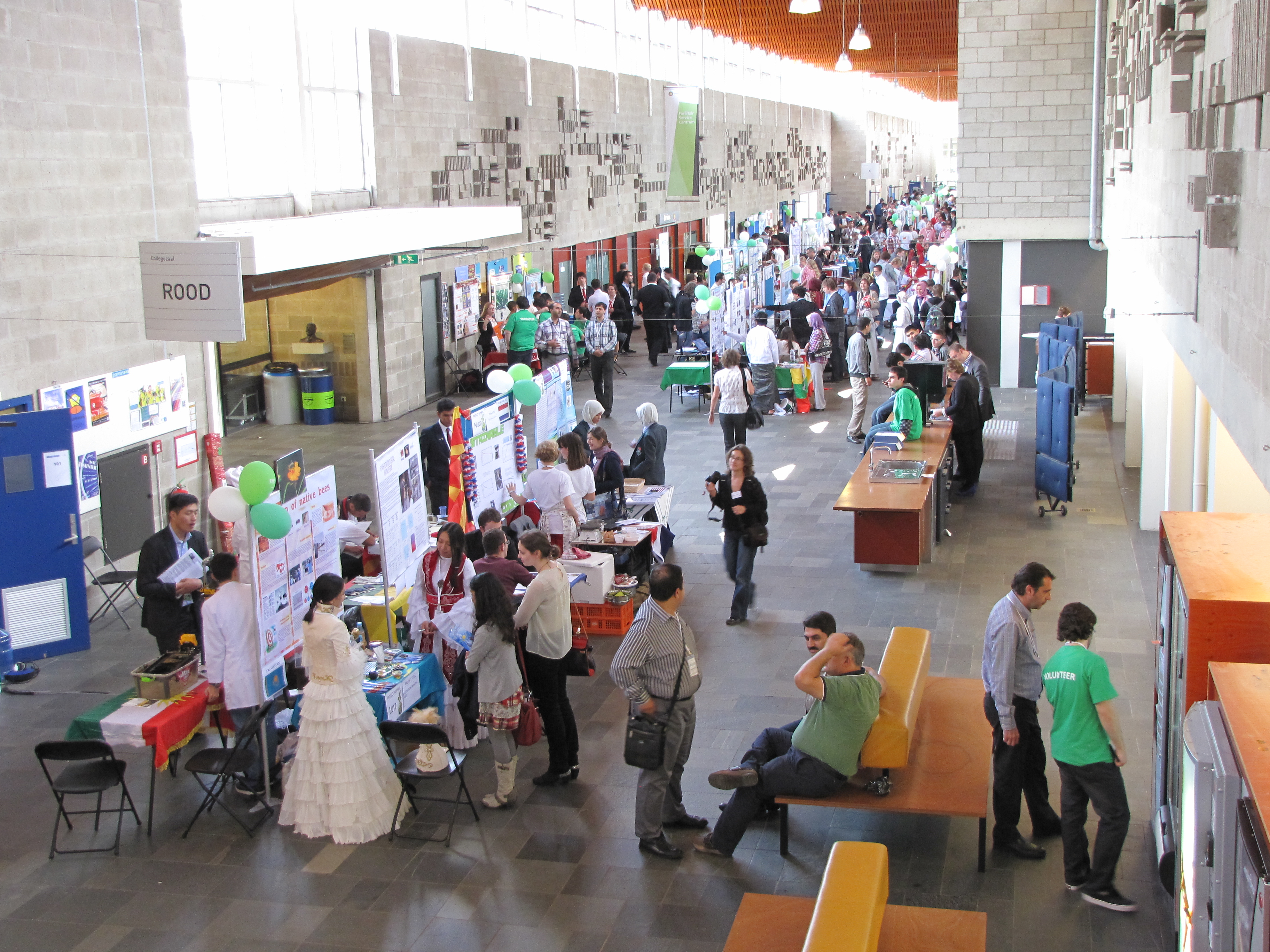 Both the Regional Meeting and Sustainability Olympiad opened on Monday, 11 June 2012, at the University of Utrecht, with a focus on the students who traveled from around the world to attend. The Olympiad was organized by GLOBE in the Netherlands and three Dutch partners. Ceremony Chair Esther Tielen welcomed everyone and introduced the ceremony   speakers, including Dr. Teresa Kennedy, GLOBE Program Office International Division Director. Dr. Kennedy congratulated the students on their hard work stating, "It was impressive to see your projects. We are very happy that GLOBE is involved in this amazing event!" At the conclusion of the ceremony, two students from each country added soil to a large pot holding the "sustainability tree" and said hello in their home language. The international project competition took place on 9 June; the top ten project nominations included a Constructed Wetland, Sustainable Energy, WavEnergy, Environmentally Friendly Red Ink, Sustainable Fitness, Selective Street Lighting on Solar Energy, Ecosaver, Earth Warmth Vapour Engine, Sea Pollution by Oil, and Salt-Sweet-Sea Program. 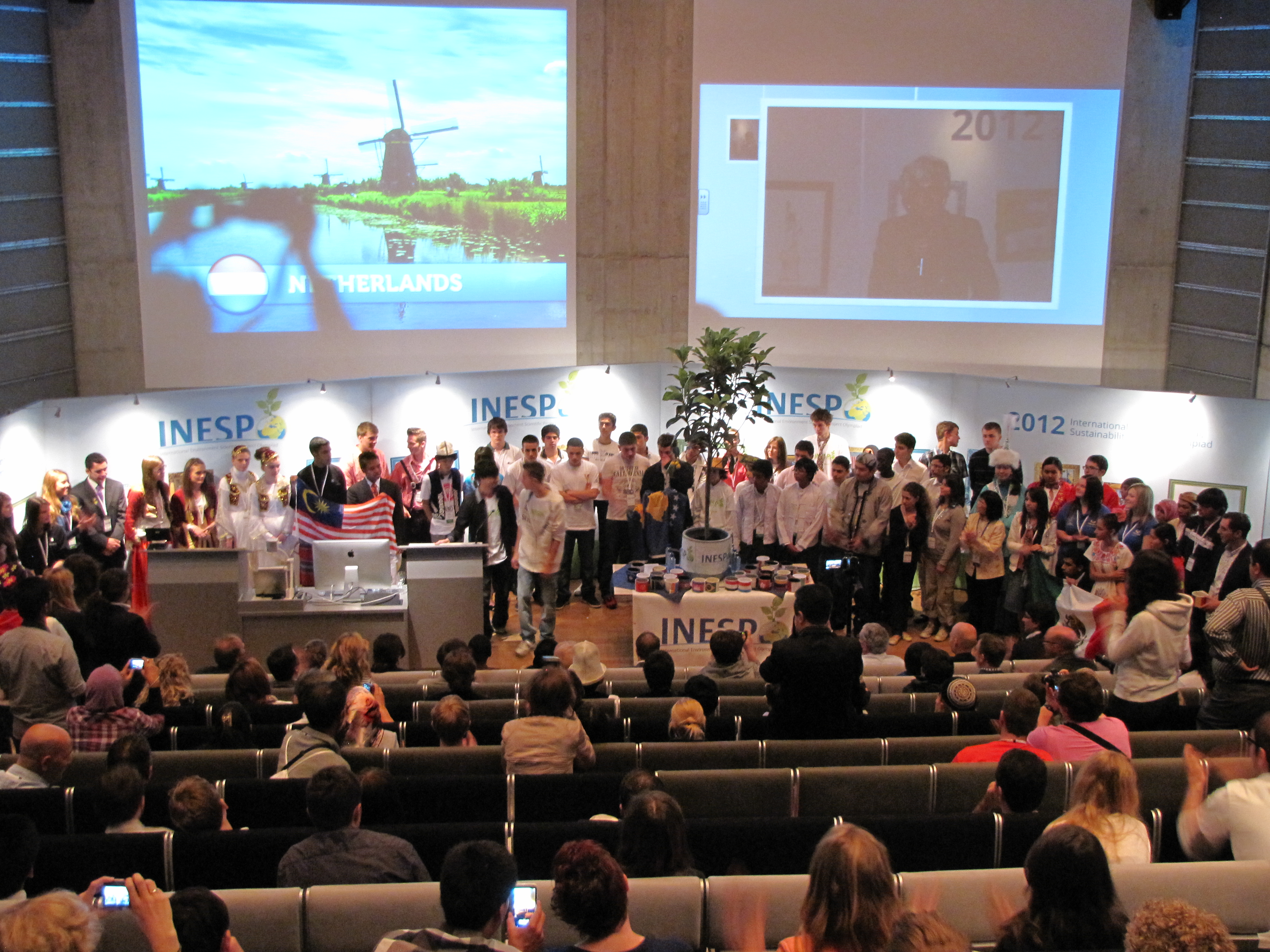 Following the opening ceremony, Czech Republic Country Coordinator Mrs. Dana Votapkova discussed the recent activities of the Europe and Eurasia GLOBE Board. Regional Help Desk Representative Mr. Matthijs Begheyn spoke about the activities of the GLOBE Europe and Eurasia Regional Help Desk Office throughout the past year, including the development of phenology, atmosphere, and aerosol projects and the organization of the Regional Meeting and Sustainability Olympiad. A special presentation was made by the Country Coordinators from the Europe and Eurasia region. They collaborated to create a book of photo memories of Dr. Andy Tasker to symbolize the lasting impression his passion and dedication to GLOBE instilled on the region and presented the book to Dr. Tasker's wife, Mrs. Linda Lockhart Tasker, GLOBE Country Coordinator in the United Kingdom. Three minutes of silence were observed for Dr. Tasker who was honored as a remarkable leader and friend. 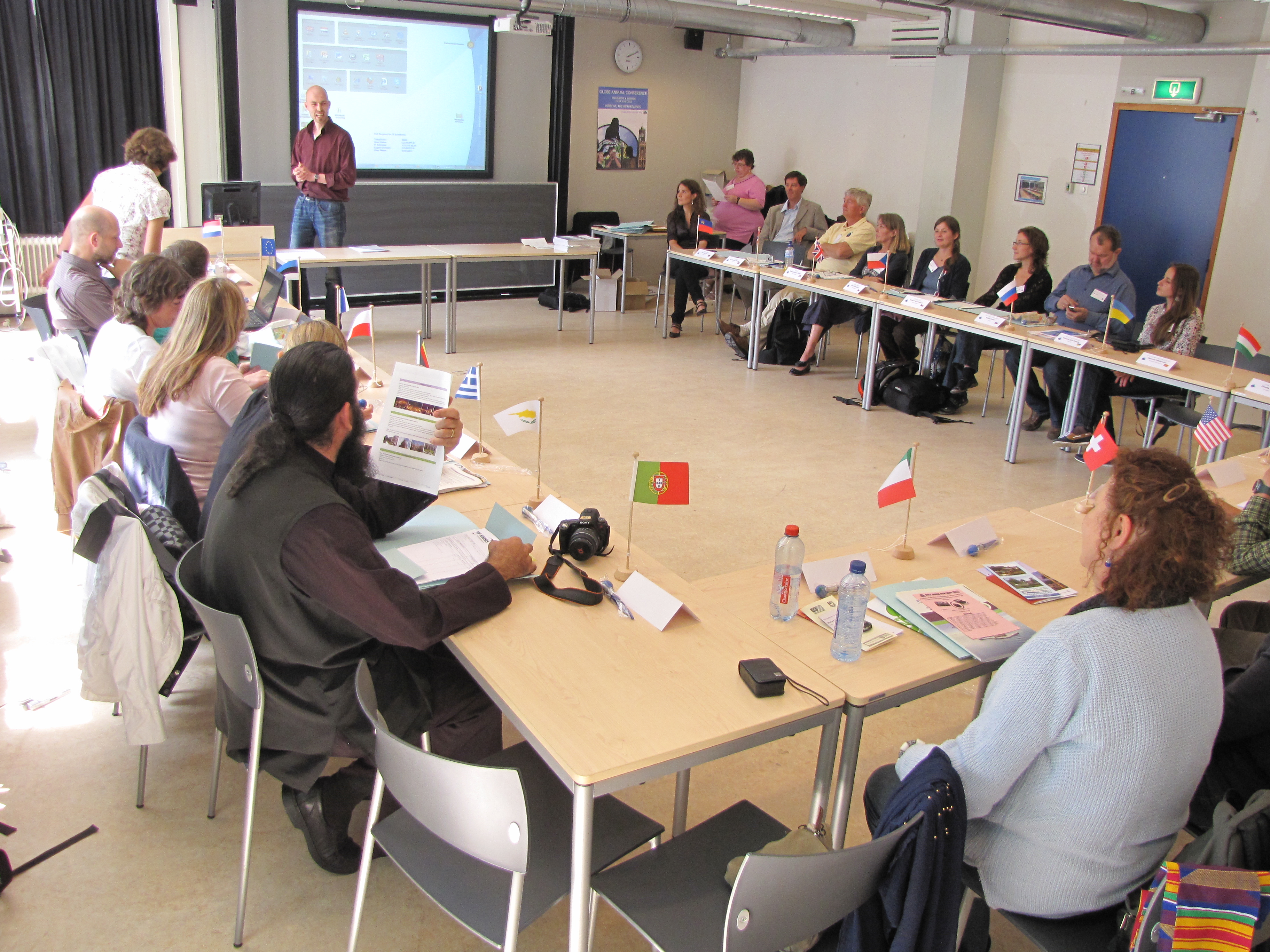 The remainder of the meeting consisted of strategic discussions and the exchange of best practices between Country Coordinators, who each presented GLOBE activity highlights from their respective countries. The Europe and Eurasia GLOBE Board, the Regional Help Desk Office and Dr. Kennedy, on behalf of the GLOBE Program Office, each reported on strategic activities occurring over the last year. Mr. Frans Snik, Astronomer from Leiden Observatory, presented the iSPEX project which uses an inexpensive add-on for the iPhone to measure aerosols. These measurements can then be compared with GLOBE sun photometer measurements. Scientists from several Dutch scientific institutes together with GLOBE Netherlands presented a plan to take aerosol measurements with smartphones and use the data for the validation of satellite images. Using this incredible technology, students can help the European Environmental Agency in their work. Mr. Pierre Philippe Mathieu, of the European Space Agency (ESA), provided an inspiring presentation about the potential of the GLOBE network and how ESA would like to become more involved with the program. Additionally, Dutch teacher Mr. Ton Reckman presented an update of the EU funded Comenius project in which GLOBE schools from nine countries work together in the SCRC.

On Tuesday, 12 June an extensive presentation about the GLOBE Student Climate Research Campaign (SCRC) was given live on Skype by Dr. Donna Charlevoix, GPO Science and Education Division Director, including recaps from the first two years of the project and also the 2012 Climate Video Competition results. The focus of SCRC Phase 2 will be climate research projects centered on the following themes: Researching your local climate; Ecosystems and climate; Water and climate; and Air pollution, human health and climate

GLOBE's IOPs, the Great Global Investigation of Climate (Sept., Dec., March, June), Climate and Land Cover (Oct., Jan., Apr., July), the Surface Temperature Campaign (Dec.), and Phenology and Climate (Sept. – June) were highlighted. The SCRC Implementation Plan including the complete schedule of events can be downloaded from the GLOBE website.

In addition, Dr. Charlevoix provided a brief summary of many new GLOBE website capabilities, moderated a discussion session, commented on the Master Trainer Meeting that was held in May 2012 at UCAR in Boulder, Colorado, and thanked Mr. Marcus Eugster from Switzerland and Dr. Feodor Surkov from Russia for representing the region. Current GLOBE Science and Education activities such as e-Learning module testing, the building of a GLOBE International Scientist Network, and the weekly GLOBE Program Scientists' Blog were also highlighted. GLOBE France Country Coordinator Ms. Danielle de Staerke commented upon how these advancements will work with current tools used in the Europe and Eurasia region. 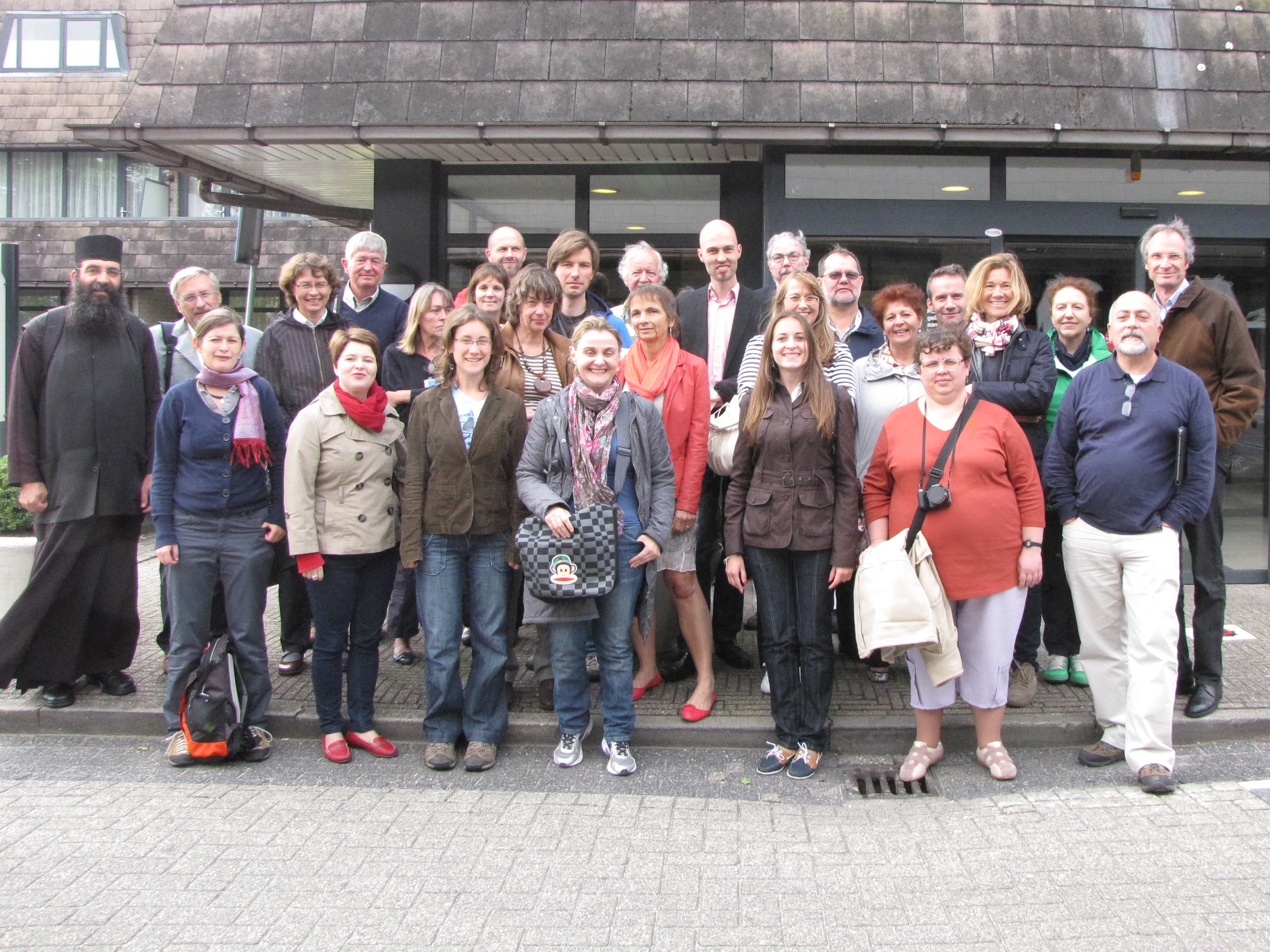 Mr. Arjen Wals, Professor and UNESCO Chair of Social Learning and Sustainable Development at Wageningen University, delivered an informative presentation on how to integrate GLOBE with initiatives underway regarding education for sustainable development. Following his session, Dr. Kaido Reivelt, GLOBE Estonia Country Coordinator and GLOBE Europe and Eurasia Board Member, led a discussion about priorities, strategies, and possibilities for new projects in the region.  A summary of the Tree Ring Project, a two-year study that uses tree rings in order to determine an environment's climate in any given year was presented, as well as information on the Black Carbon Project. The GLOBE Europe and Eurasia Regional Constitution was updated and accepted, and the following new members were elected to the Board: Mr. Karl Torstein (Norway) [chair], Mr. Matthijs Begheyn (Netherlands) [co chair], joining Ms. Danielle DeStaerke (France), Ms. Magda Machinko-Nagrabecka (Poland), Mr. Farid Hamdan (Israel) and Dr. Kaido Reivelt (Estonia). Finally, Dutch teachers Mr. Tom Reckman and Ms. Maaike Vollebregt provided an informative session on student research and commended the progress of the group of GLOBE schools from nine countries that work together within the SCRC on aerosols and phenology.

On Wednesday, 13 June, an aerosols workshop was conducted at the Netherlands Royal Meteorological Institute (KNMI). Ms. Elise Hendriks from the KNMI, principle scientist for aerosols in Europe, along with Mr. Matthijs Begheyn, from GLOBE Netherlands, and Dr. David Brooks, President of the Institute for Earth Science Research and Education (USA), explained how GLOBE schools in Europe can join the aerosol campaign. The proposed campaign will begin with a pilot program in August/September 2012 and will go live for everyone in March/April 2013. In preparation for the pilot, an "introduction to aerosols" film will be produced during the June-August 2012 timeframe that can be shown to students in classrooms as a starting point to their training. Participants discussed the proposed campaign and brainstormed ways to connect to the campaign in their local communities throughout Europe. 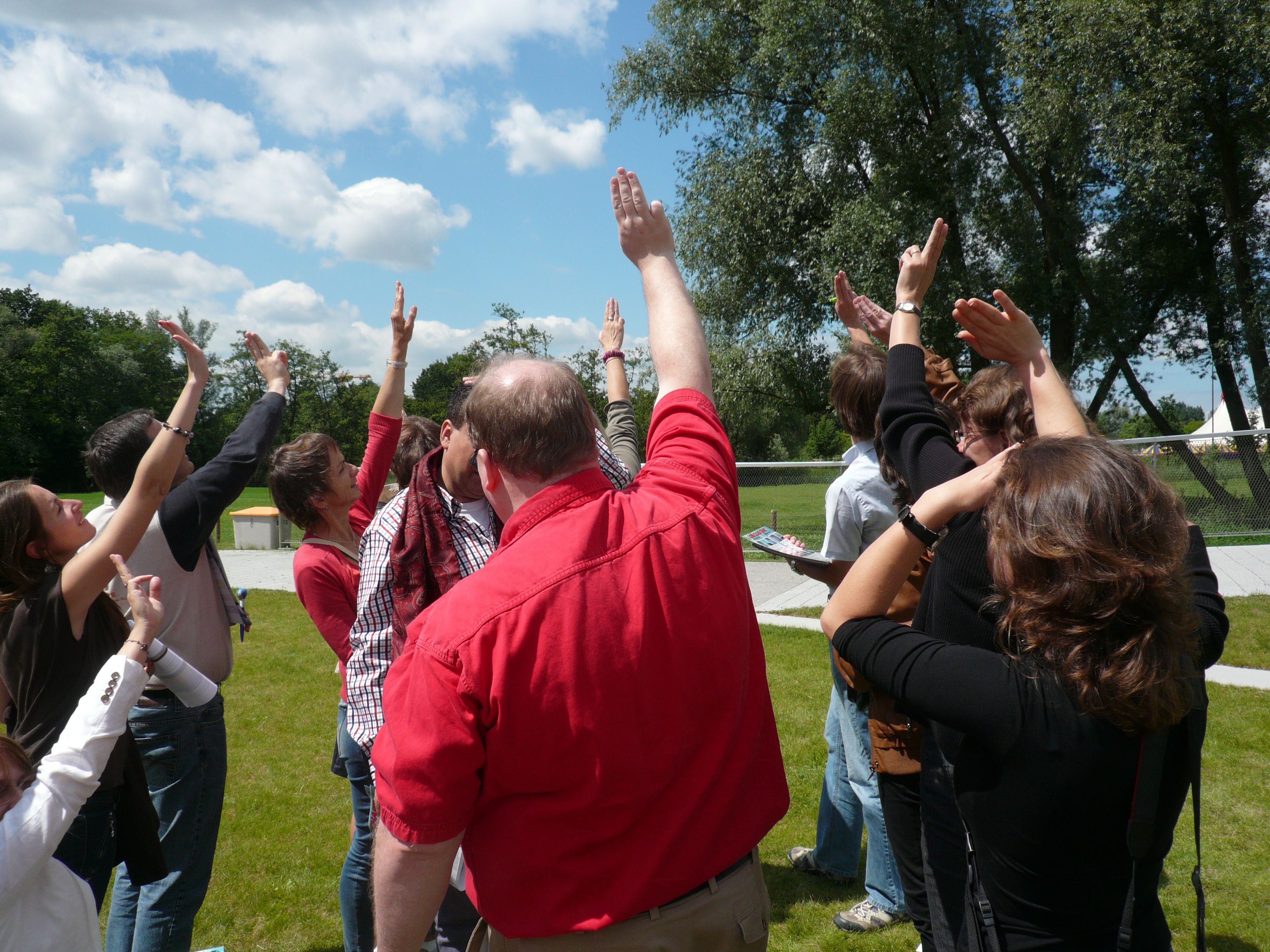 The CloudSat Team held a training on Thursday, 14 June. GLOBE U.S. Partners Dr. Todd Ellis and Mr. Peter Falcon trained participants in comparing satellite images with photos of clouds taken from the ground. To make the comparison, students must take pictures of a convex mirror that is lying on the ground in every cardinal direction in order to cover the entire sky. The pictures are then uploaded to the CloudSat website and the corresponding GLOBE measurements are submitted to the GLOBE database. Feedback about the measurements is disseminated in the CloudSat newsletter. Launched on 28 April 2006, CloudSat was designed to study the role clouds and aerosols play in regulating Earth's weather, climate, and air quality. Students from 11 countries (Canada, Thailand, India, New Zealand, Germany, Australia, Estonia, Croatia, United States, Cameroon, and Dominican Republic) have participated in the (CEN) by "ground truthing" the measurements taken by the CloudSat satellite.

The Olympiad came to a close on 14 June with a reception and awards ceremony. The excitement was palpable as students were anxious to hear the results of the competition. Several entertaining performances served to ease the tension as they waited for the final results from the judges, such as a student who sang as he played the guitar, and a juggling act. At last the winners from Bosnia and Herzegovina, Brazil, Mexico, Romania, and Turkey were announced and celebrated with cake and confetti, along with several silver and bronze medals, encouragement awards, and audience awards. 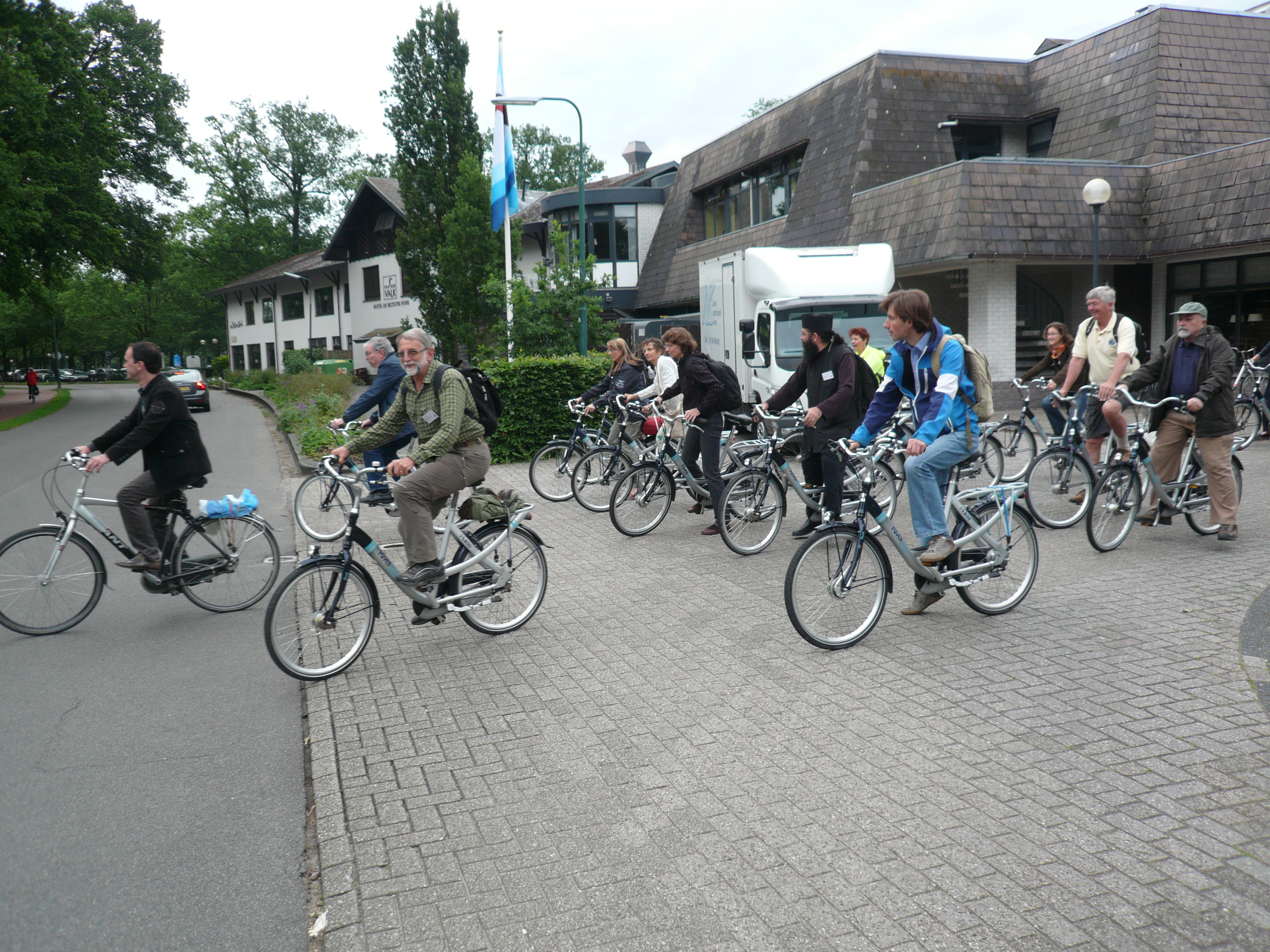 Country Coordinators rode bikes to the Sustainability Olympiad and toured the countryside after meetings each day! 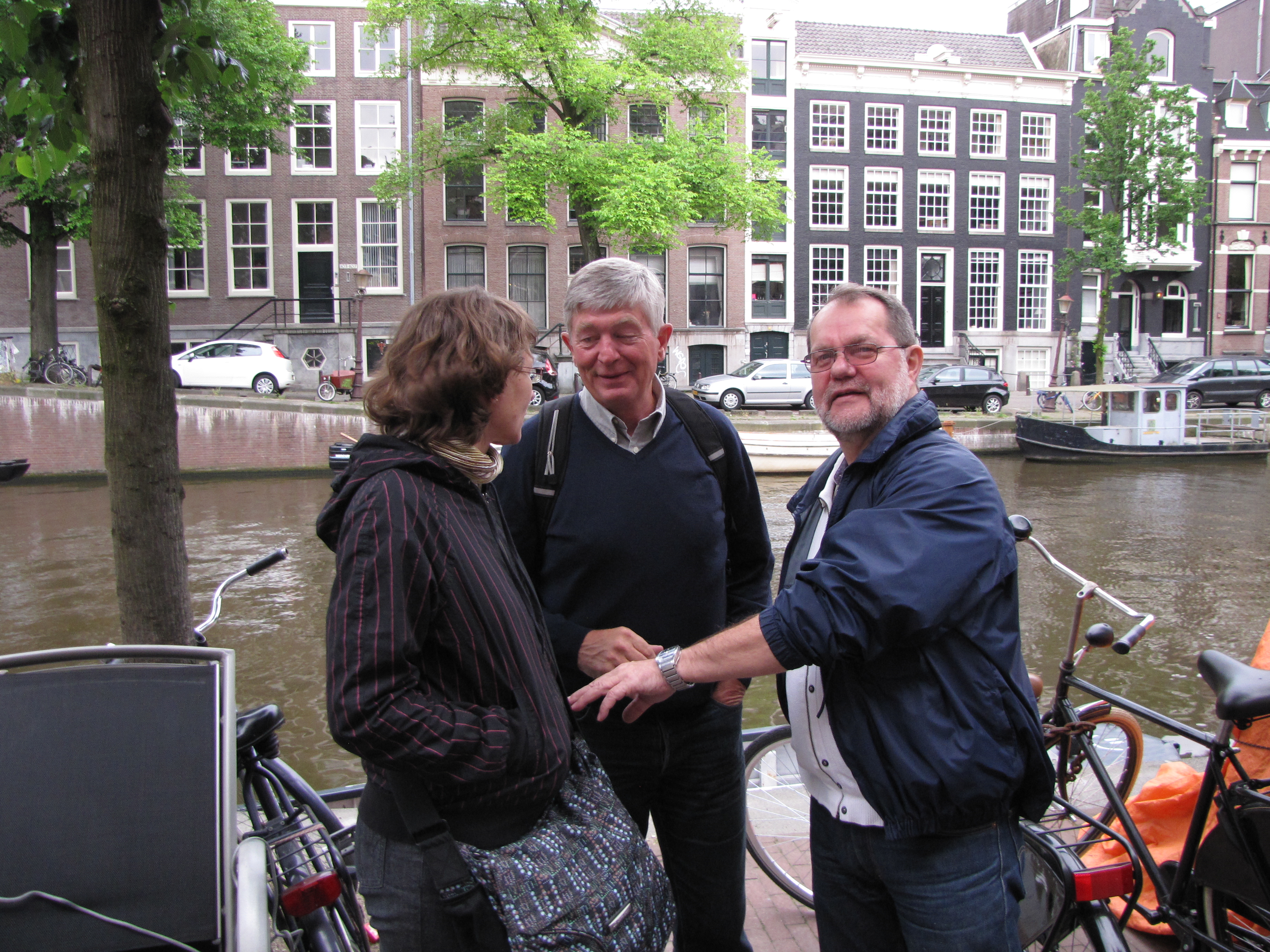 Combining the Regional Meeting and the Sustainability Olympiad made it possible for Country Coordinators to plan for future successes of GLOBE in their countries and the region as well as network together.

More information about the Regional Meeting can be found on the GLOBE Europe website.

Make plans to join in on the fun next year at INESPO 2013! More information and pictures can be found at www.inespo.org

See the INESPO program for visitors

Read GLOBE Stars about past Europe and Eurasia Regional Meetings: