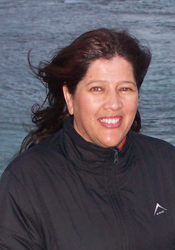 Rogeline Christine Brettenny has become a prominent figure in the development of the GLOBE Program in South Africa. A GLOBE master trainer and facilitator, she is a vital member of the GLOBE Regional Office in South Africa, serving as Deputy Director of GLOBE in Africa Environmental Resources Development and Training.

Initially, Brettenny assisted with training, logistics and anything that would facilitate the growth of the program––even cooking food for teachers at weekend training workshops. She recognized the immense opportunity that GLOBE presented to their rural community, serving learners that seldom ventured beyond the borders of their towns. "STEM subjects are on the decline in schools and the ability to encourage learners and inculcate the love for STEM subjects is almost nonexistent. The hands-on minds-on aspect of The Program, the opportunity to engage with real scientists, and to do real locally relevant projects in the community makes it and ideal program for learners. GLOBE has given the kids the opportunity to interact with learners on every continent; they now know and understand that there is a bigger world out there. GLOBE has engendered a love for science and has encouraged them to achieve."

Influenced by GLOBE, Brettenney looked for opportunities and tools to reach more learners and to engage them in real science. She and her learners became part of Adopt a Drifter, a project of the National Oceanic and Atmospheric Administration (NOAA). They sailed with scientisis to deploy drifters (bouys) into the Agulas stream––one of the swiftest ocean currents in the world––located in the Indian Ocean and fed by the East Madagascar Current and to a smaller degree from the Mozambique Current. The drifters were carried along ocean currents and measured and transmited sea surface temperature data and positioning coordinates via satellite for roughly 400 days to learners in their classrooms. Adopt a Drifter data are used by ocean scientists and students to track the warm and cold currents that affect the climate. Tracking drifters also helps to provide more accurate weather forecasts, track oil spills and learn where drifting plants, animals and migrating species travel.

Brettenny takes pride in her many GLOBE projects and activities. They include:

Out of all of the notable projects and involvements, the one that is most notable, is the Mt. Kilimanjaro Learning Xpedition. "When I flew back from the 2009 GLOBE Africa Annual Meeting in Ethiopia, I saw Mt. Kilimanjaro in the distance. I had no idea I would be on the mountain with my daughter, Macaila, later that very year." Brettenny was part of the initial group that helped develop the initial research questions and to help plant the original probes on the mountain.

Brettenny is also Centre Manager for the @Peace Care Centre which provides primary healthcare, HIV/Aids awareness and outreach and hospice care in the Eden District, Mossel Bay. She is the proud mother of Leigh-Roy, 23, a commercial pilot and Macaila, 19, a student at the University of the Western Cape.