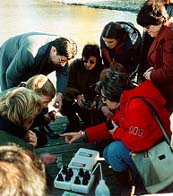 On Sunday, October 26, twenty GLOBE teachers from Greece arrived in Koeln City, Germany accompanied by their support team from the University of Athens: Nektaria Adaktilou, Nektarios Chrysoulakis, and Athanasios Andritsos.

The next morning, Germany's GLOBE Country Coordinator for Science and Technology, Dr. Roswitha Gruemann welcomed the group and joined them for a visit to Lessing Gymnasium, a GLOBE school in Koeln-Porz. GLOBE student Brigitte Lauth and GLOBE teacher Herr Janzen showed them the school's GLOBE sites. The whole group took hydrology samples and participated in hands-on training at the Rhine River.

That afternoon, the teachers visited DLR, the German Aerospace Center and headquarters for the GLOBE Germany science and technology project office. The teachers learned about the str ucture and development of GLOBE Germany and enjoyed a tour through the facilities of the Astro naut Training Center.

On the second day of their trip, the Greek contingent visited Albertus-Magnus-Gymnasium , a GLOBE school in Bergisch-Gladbach. There, they were greeted with "kalimera," which means "hello" in GREEK. After demonstrating the school's GLOBE work, GLOBE Teacher Erika Doenhardt-Klein and the teachers discussed initiating collaboration and student exchanges between GLOBE schools in Greece and the Gymnasium in Bergisch-Gladbach. After lunch, Bernd Tissler, the German Country Coordinator for Education, talked about integration o f GLOBE into the German curriculum and discussed the differences between the school systems of both countries. Good-byes were said at a small reception at the end of the day.