GLOBE Grows in Two of the World's Southern-most Countries

Teachers from six Latin American GLOBE countries and Spain came together under the GLOBE umbrella recently during two October training workshops in Chile and Argentina, which coincided with the Southern Hemisphere's springtime.

The workshop could not have taken place without Hewlett-Packard's donation of 20 computers for the nine-day workshop, and Microsoft Chile's donated software for the computer lab. Chile's Ministry of Education paid for high-speed internet connections for the workshop and a full-time computer technician. 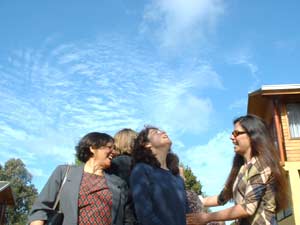 GLOBE's new inquiry-oriented training format was a key focus of the International Training Workshop in El Quisco, a small coastal town in the Valparaiso region of Chile. Participants attended from throughout Chile as well as from the Dominican Republic, Costa Rica, Panama, Mexico, and Spain. The Chileans came from all parts of their country, including Puerto Montt and Puerto Williams (55 S latitude) -two of the world's southernmost and windiest cities, and Arica near the border of Peru in one of the world's most arid deserts. Rarely has such a range of environments been represented by teachers at a single GLOBE workshop. 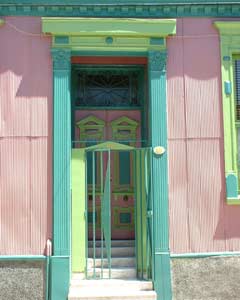 The uniquely elongated geography of Chile produces great gradients north to south. And the east-west gradient of elevation along the length of Chile produces striking differences in temperature and precipitation as you move from the coastal plains at sea level to the high elevations of the Andean mountains. Some areas have no seasons to speak of; others have only a wet season and a dry season annually, while still others have the four seasons typical of temperate climates.

The inquiry-oriented lesson plans, used to teach the Atmosphere, Hydrology, Soils and Land Cover investigations, coupled with the geographic diversity among the teachers, made for a discussion so energized that it was often hard for classes to end, according to participants. GLOBE served as an ideal vehicle for communication and student comparisons of climate, seasonality and phenology. Valeria Fuentealba, GLOBE Coordinator for Chile who works for the Ministry of Education, organized a workshop noteworthy not only for its diversity of land, climate and people, but also for its richness of culture. The workshop opened with traditional Chilean dancing. Later, the El Coro de Adultos Mayores de El Quisco (The Senior Choir of El Quisco), and the Grupo las campanitas de Escuela de Isla Negra (The Isla Negra School Hand Chime Ensemble) delighted GLOBE participants with their music, performed throughout the week. Meanwhile, the Niños reporteros de Escuela El Totoral (El Totoral School Student-Journalist Club) filmed and interviewed participants for their school paper. Valparaiso, also known as the Costa de las Poetas or Coast of the Poets, is famous for its diversity of flowers and plants and a rich culture of poetry, literature and music. The great Pablo Neruda was among the artists and writers that have been inspired by the setting. Participants were also inspired, both by the spectacular setting and a very well-run event. In addition, the workshop showcased a stellar team of trainers from a wide range of countries, including Chile, Mexico, Panama, and Spain. Five trainers participated in GLOBE's "Master Trainer Program," a new opportunity designed to certify participants to train GLOBE trainers. GLOBE Master Trainers greatly enhance a region's ability to grow GLOBE using local trainers instead of depending on U.S. trainers. Master Trainer candidates included: Jose Luis Escuer (Spain), Valeria Fuentealba (Chile), Maria Elena Ortiz Panama), Guadalupe Pardo (Mexico) and Miguel Zimmerman (Panama). Escuer is a GLOBE teacher from the IES Ramon J. Sender School in Spain, and was certified as a GLOBE Master Trainer in Hydrology. The other candidates will make the next step, which is to lead their investigation at an International Training Workshop.

"The El Quisco workshop has moved GLOBE forward in Chile tremendously," Fuentealba said. "It is also a milestone for the role GLOBE can play for education in Chile, giving all students the opportunity to understand the scientific method applied to the different elements of nature."

Seven schools in Bariloche, Argentina (Patagonia) use GLOBE to explore cooperation and research

Another springtime workshop during October 2002, this time in neighboring Patagonia in Argentina, brought together 16 GLOBE teachers from seven schools. The schools are all found in the vicinity of the town of Bariloche, on the edge of the large Andean lake, Nahuel Huapi. The workshop was supported by the Fundacion Educativa Woodville (The Woodville Educational Foundation). GLOBE Trainer Hudson Roditi and Argentina's GLOBE Coordinator María del Carmen Galloni, trained the workshop participants. 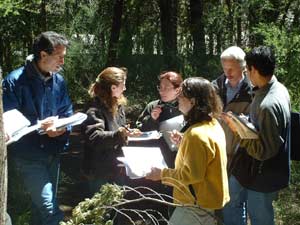 On the Andean side of Nahuel Huapi, where the lake is surrounded by snow-covered mountains, approximately 2.7 meters of rain fall annually. In the lowlands to the East, however, only about 0.25 meters of rain falls each year. This is typical of the gradients that characterize much of the Patagonian region, because moist air from the Pacific moves eastward over the mountains, dropping precipitation as it rises, then creating a dry "rain shadow" on the east side as it descends again. In parts of the mountains here, there are temperate rainforests, an ecosystem known as the Selva Valdiviana or Valdivian Jungle. These varied microclimates make a perfect opportunity for neighboring GLOBE schools to compare their GLOBE measurements.

Collaboration between the seven schools quickly became the theme of the workshop, as bonds grew steadily among teachers. 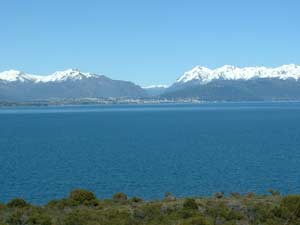 "A strong camaraderie was struck up among the different GLOBE participants, which was particularly evident during the field work," said Edward Shaw of the Fundacion Educativa Woodville. "Many of us reflected that this is the sort of environment that we should seek to repeat in our classrooms."

Participants also discussed the collaborative possibilities between GLOBE schools in Argentina and Chile. The major changes in climate going from the Pacific to Atlantic Oceans, passing over the Andes, make for exciting possibilities in comparative studies for countries as closely linked as Chile and Argentina.

GLOBE in Argentina Coordinator Maria del Carmen Galloni helped conduct the workshop and encouraged Bariloche teachers to have monthly progress meetings to discuss their GLOBE research ideas and collaboration projects. Joe Salazar, representing the US Embassy in Buenos Aires, attended the Bariloche workshop and said he was impressed by the teachers' enthusiasm for GLOBE, and by the Program's potential in Argentina.