A Shining Star in Mexico

Mexican school teachers and scientists from Arizona, USA, met in the Sonora Desert in Mexico, at the Universidad de la Sierra (U. Sierra) Workshop in which the Spring Soil Moisture Campaign (SMC) was showcased. The goal of the SMC data collection effort is for teachers and students to collect near-surface soil moisture data twice annually within two nine-day field campaigns that are tied to Earth Science Week (Oct. 9-17, 2004) and the week surrounding Earth Day (Apr. 22-30, 2005). While most GLOBE measurements are traditionally collected on the school grounds, our objective is to collect data in areas outside or surrounding a school's GLOBE site. The SMC is the latest and preferred protocol for collecting GLOBE soil moisture data, although data are still welcome, encouraged and accepted from ALL soil moisture protocols.

With U. Sierra's enthusiastic leadership in becoming established as a GLOBE partnership and the bilingual teaching expertise of Yajaira Gray (Conservation Biologist, Arizona Sonora Desert Museum), and Floyd Gray (Director of University of Arizona's "Students Across the Border" Program), five schools were proudly added to GLOBE in Mexico: 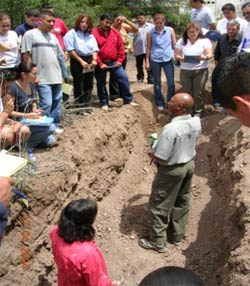 Future efforts in Mexico to support U. Sierra's partnership and SMEX04 in Northern Mexico will be possible through a recent $15,000 grant, awarded to Drs. Whitaker and Washburne by CONAHEC's Border Pact Program. SMEX04 is a coordinated effort among scientists to provide soil moisture validation data using remote sensing equipment in aircraft, satellites and manual soil moisture sampling by ground crews. Any near-border school can be a part of this cross-border research initiative by downloading the bilingual (Spanish/English) SMC literature and getting information about future workshops at:http://www.hwr.arizona.edu/globe/sci/SM/SMC or by contacting Martha P.L. Whitaker mplw@hwr.arizona.edu

The SMC promotes two low-budget, low-technology strategies to participate in the twice-annual data collection campaigns. One is the use of foil pouches enclosed in zip-loc to bags, in lieu of soil sample cans. The foil envelopes are made by using a simple folding pattern to craft a "pouch" out of heavy-duty aluminum foil. Another low-budget strategy is to build a "light-bulb oven". The oven is constructed out of a 55-gallon drum, cut in half lengthwise, covered with aluminum-backed fiberglass insulation, and placed on concrete paving bricks. The device uses four 100-watt light bulbs under which soil samples are placed to dry (Figure 2).

For instructions on how to make and use the foil pouches, see:http://www.hwr.arizona.edu/globe/sci/SM/SMC/AGIfoilpouch.pdf

For instructions on how to make and use a light-bulb oven, see:http://www.hwr.arizona.edu/globe/sci/SM/SMC/OvenHowto3pg.pdf