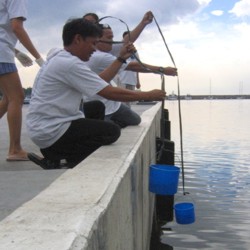 Aimed at creating a network of GLOBE Program Schools along the coastline of Manila Bay to gather data relevant to its environmental state, the GLOBE Program in Philippines, in cooperation with the Indiana University Alumni Foundation (IUAF) Philippines, Inc. and the Philippine Science High School (PSHS) Main Campus, conducted a teacher training workshop entitled "Environmental Monitoring of Manila Bay using GLOBE Protocols." The workshop, which had 31 trainees, included both schools that were new to the GLOBE Program as well as schools that took part in previous training. Nine Manila Bay area schools participated, as well as five schools from the PSHS System.

Senator Ramon B. Magsaysay, Jr., of the Senate Committee on Science and Technology, served as the guest speaker during the Opening Ceremony. IUAF Officers, PSHS Campus Directors and Dr. Emmanuel Ramos, former GLOBE-Philippines Country Coordinator, were also in attendance. As the training progressed, teacher trainees became familiar with the different protocols for the Atmosphere, Water and Soil GLOBE protocols. Biodiversity studies were also conducted via a modified protocol of the Macro-invertebrate Survey. Actual data gathering sessions were held inside the campus, the Ninoy Aquino Parks and Wildlife as well as the Philippine Naval Office along Roxas Boulevard in Manila. Since one of the difficulties encountered by previous schools was the lack of equipment, each of the Manila Bay schools received a kit containing basic instruments for atmosphere, soil and water analysis. 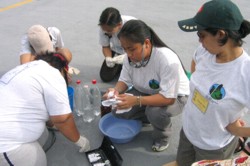 The last day of the training allowed teachers to practice uploading their data to the GLOBE Web site. Each school was also asked to come up with an action plan of how to integrate the protocols into their curriculum, tentative schedules for echo seminars and site visits by the PSHS faculty handling the GLOBE Program. During the Closing Ceremonies, one participant from Cavite expressed her desire to "have a ripple effect in our mission to protect the environment" by sharing what they have learned in this seminar workshop to their co-teachers, students and the community.

Preliminary site visits to the six new GLOBE partner schools in Metro Manila were conducted in January, 2006. Formal site visits have not been possible since most of the recently-trained teachers have yet to start implementation of the action plans they have drafted, with the exception of Tangos National High School in Navotas which held an Echo Hands-On Training in February 2006, and Parañaque Science High School which integrated some protocols in their Research classes. Reconnaissance activities are being developed in time for schools opening in June 2006.