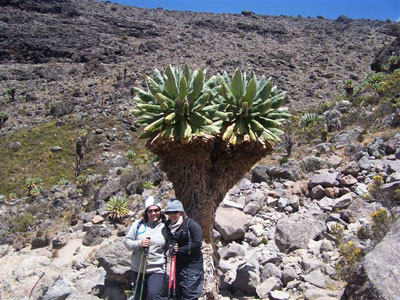 On 24 September 2009, an international team of GLOBE students, educators, and scientists began their trek to the summit of Mt. Kilimanjaro in Tanzania, Africa, to evaluate the evolving ecosystem of the largest freestanding mountain in the world. GLOBE Xpedition Team goals involved developing a sense of their surroundings while employing hands on research methods that would add to an expanding base of knowledge regarding temperature, permafrost, ice, and vegetation. Through this experience, students learned how observation leads to the posing of research questions. Participants reviewed data gathered from prior research and documented their GLOBE measurements as a baseline for future discovery.

Prior to the journey, members prepared themselves through team building activities and physical training. The team equipped themselves for challenging conditions of the climate and altitude. Meals were prepared for students at each campsite with energy and hydration in mind so their bodies remained strong and functioned at their best. Hot tea, soup, and hot chocolate were also available to assist in the regulation of spiking body temperatures. Team members kept their backpacks fully stocked with water and nutrient-rich snacks to help sustain energy levels. Porters accustomed to the altitude assisted students by transporting camping gear ahead to set up each campsite before students arrived, and disposed of trash by carrying it back down the mountain. Due to the difficulty in adjusting to the high altitude, every measure was taken to assure a safe climb. The group reached the summit on the eighth day of their journey! The descent down the mountain took only a day and a half since the decline does not create the same problem. 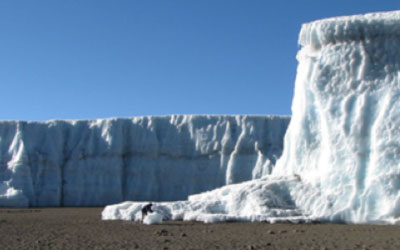 Team members utilized GLOBE Seasons and Biomes protocols to conduct research on six distinct biomes: Summit, Alpine Desert, Moorland, Heath Zone, Rain Forest, and Cultivated Areas. Results showed a variation of climate and vegetation between ecological zones. Students observed that altitudinal changes in temperature coincided with less vegetation and biodiversity. While lower levels contain plant forms that exist only on Kilimanjaro, the altitude and dropping temperatures make it impossible to sustain any sort of vegetation beyond a certain point. Existing plant forms on the mountain contain special attributes that protect them from the rough climate. In harsh weather conditions, the giant Lobelia tree closes its leaves around the core while secreting a slimy substance that protects leaf buds from the cold. The Senecio, another large tree unique to Kilimanjaro, utilizes old, dead leaves to insulate its trunk.

Mt. Kilimanjaro's changing glaciers have become a primary basis for global climate change research. Glaciers form when snowfall remains consistent year-round. Layers of snow bury and compress previous layers and transform into ice. Over time, the density of the formation increases and glaciers form. After two thousand years of consistent snowfall, the quantity of this precipitation on Kilimanjaro is beginning to decrease, which has resulted in shrinking glacier mass. Compared with measurements taken by 2008 GLOBE Xpedition team members, the glacier shown is 40 meters smaller than last summer. 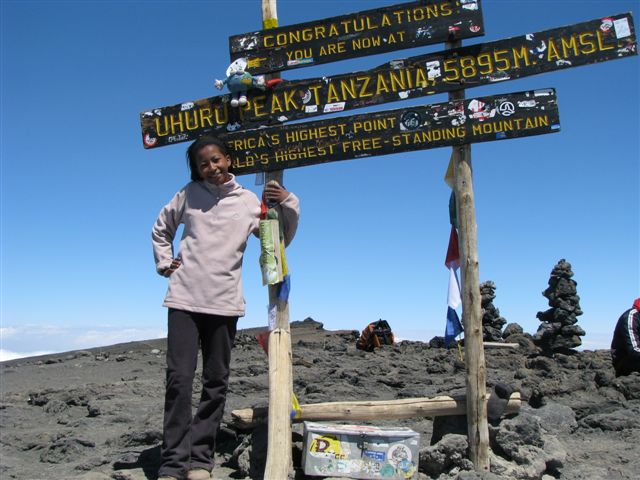 Another research area of focus required students to identify Anopheles mosquito larvae and observe how climate change in each distinct biome affects mosquito habitats on Kilimanjaro. These observations are useful in researching the spread of malaria in Africa. As temperatures increase, less snowfall results in more rainfall on the mountain. Thus, more ponds of water form enabling mosquitoes to inhabit higher altitudes.

The Xpedition Web site received 6,656 visits from worldwide schools over a 10-day span. The team kept journals updated with daily summaries of their travel experience and gathered each night to work on their research questions and respond to emails from students following their journey all over the world, such as this one from Netzin Steklis:

"My hats off to the webmaster-- THIS IS EXCELLENT! I am a primate ecologist working in the Virungas mountains in Rwanda with mountain gorillas, but I am also a mom turned Environmental Educator-- This is exactly what I have been trying to get launched with Prescott College's Center for Children and Nature in conjunction with GLOBE Rwanda!!! Is this the first expedition for the Seasons & Biomes project? Is there going to be another?"

The answer is YES! GLOBE Xpedition Teams will continue this important research on an annual basis! GLOBE students in Africa and around the world plan to observe attributes of the mountain's ecosystem well into the future. The 2009 team set the stage for next year's Kilimanjaro expedition by taking pictures of the current state of the glaciers and placing temperature sensors in each of the biomes. The 2010 Kilimanjaro trek will take place from 23 August – 2 October. Learners from 12 years old and onwards will be allowed to climb the mountain. More details will be available on the Africa Regional Web site www.globe-africa.org 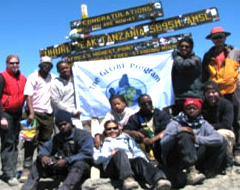 "This event gave the African students a greater sense of place and pride in their country, their continent. They actually engaged in scientific discovery with real scientists on site," writes Dr. Sheila Yule, GLOBE Program Office Seasons and Biomes ESSP Team Leader and Alumni Coordinator

"On behalf of the Africa Regional Office I would like to thank Dr. Teresa Kennedy, Dr. Sheila Yule, Professor Kenji Yoshikawa from UAF, Professor Kenji Narita from the University of Akira, Japan, the expedition leaders Rogeline Brettenny and Mike O'Toole, Dr. Elena Sparrow and the Seasons and Biomes team, the country coordinator Mary Kivaria and her team, the most important component of the trek-the students, and the sponsors who made participation possible," expresses Mark Brettenny, Chairman - Africa Consortium CEO - GLOBE in Africa ERD&T,Regional Director - Africa

Many thanks to everyone who helped put Xpedition Kilimanjaro into action. It proved to be an educational, eye-opening experience for students, as well as a great success for the Africa region and GLOBE.

Take a closer look at the students' experiences on the mountain by visiting the Seasons & Biomes and Xpedition Web pages.