Lucky Friday the Thirteenth for GLOBE Learners in Cape Town

The GLOBE learners from Indwe Secondary School were pleasantly surprised when they were awarded 13 new bicycles on 13 March 2009. The bicycles were presented by Mr. Kurt Hendricks from the Cape Town Department of Transport and Public Works. The new bike owners were also provided with complete safety kits and were given instruction on safe riding. GLOBE teacher and Atmosphere trainer, Mrs. Rogeline Brettenny, and her GLOBE learners, applied for the award through the Bicycle Empowerment Network's BEN Project. Mrs. Brettenny's students engage in many GLOBE activities outside of classes, and the bicycles will be used for transport home after GLOBE activities that take place after school. 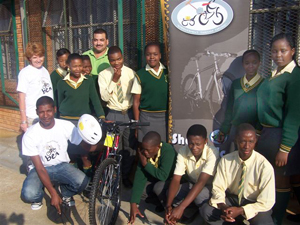 BEN, a partner in the Bicycle Partnership Program of the Interface for Cycling Expertise (I-CE), distributes bicycles to schools and learners, farm workers, health-care workers and other beneficiaries throughout Africa, Asia and Latin American to promote urban mass mobility at low cost through the institution of cycling policies and With support by BEN, the cities of Cape Town and Tshwane signed a Memorandum of Understanding with I-CE for capacity building on cycling inclusive planning. Called Shova Kalula (‘pedal easy'), the national government-sponsored initiative provides bicycles to rural and urban beneficiaries. The initiative aims to maximize the use of non-motorized transport to enable communities to access social and economic opportunities at a cheaper cost, and to promote cycling as a low-cost mobility solution to low-income households, targeting scholars, rural women and farm-workers. 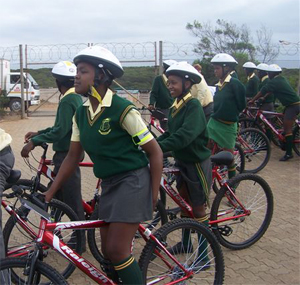 Bike riding is good for your body as well as your state of mind, and it's great for your community, too. There is no polluting exhaust released, no oil or gas consumed. The energy and raw materials used to manufacture one automobile can be used to create a hundred bikes. Biking is fast and convenient and easy on your pocketbook too.

Congratulations to Mrs. Brettenny and her GLOBE learners for their enterprising efforts to find a healthy and environmentally sound solution to the challenge of how to remain active in GLOBE activities that take place after school.