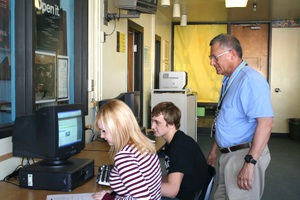 Mr. Stefan Smolski, of Oak Glen High School in New Cumberland, epitomizes the extraordinary dedication of GLOBE teachers in West Virginia who recognize the power of the GLOBE Program to awaken the scientific curiosity of children, and sometimes, even, to change their lives. "GLOBE protocols and opportunities for students to become involved with doing real science is exciting for me," he writes. "Using GLOBE protocols exposes my students to how science is done. They collect data virtually every day from the weather station and upload it to GLOBE." Since attending his first workshop in 2004 conducted by West Virginia GLOBE Partner Mr. Todd Ensign, Mr. Smolski has participated in an Advanced Atmospheres workshop to add experience in conducting the surface ozone protocol to his repertoire. The following year he attended an Advanced Phenology workshop and added GIS to the process of studying weather. It was a memorable moment when one of his students submitted a paper for the GLE, Analysis of Land Covers within 1,000 meters of Oak Glen High School, comparing results between two rural schools and integrating GIS in the analysis of the data.

Mr. Smolski explains why he has dedicated so much of his time to attending GLOBE teacher training workshops. "The educational tools provided by GLOBE integrate easily with all grade levels and meet the state's 21st Century educational goals of being relevant and promoting higher order thinking. From following a standardized procedure [protocol], collecting data, and reporting the data, student develop critical scientific skills while conducting research projects designed to answer their personal questions. More significantly, GLOBE offers fantastic exposure to analyzing data, formulating conclusions, and communicating the results," he writes. "I keep returning to GLOBE to learn more because of the quality of the teacher workshops that I have been able to attend."

Mr. Smolksi's classroom is currently the top performer in the state of West Virginia, having reported over 15,700 scientific measurements for use in student research since September 2004. 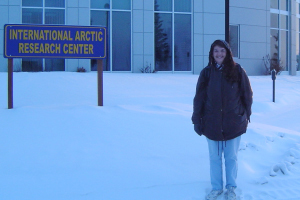 Just as impressive in enlisting student participation in GLOBE is Ms. Kathleen Prusa, of Philippi Middle School in Philippi. From her first GLOBE teacher training workshop in 2004, she was hooked. Now her students, in teams of two, monitor the weather every day. "The students are much more aware of what the weather is doing," writes Ms. Prusa. "I have even had parents tell me about their child relating to them about what they have observed. I love it when students in my afternoon classes say, 'Okay, the pressure has been dropping (or rising). What do you think will happen?' … and they can tell me whether it's going to rain, or snow, or be nice. I tell them they are weather experts and they love hearing that! My students are eager to take their turns no matter what the weather is like!"

Ms. Prusa's GLOBE professional development experiences have included a Hydrology Investigation workshop, and a Seasons and Biomes ESSP training in Fairbanks, Alaska, the only teacher from West Virginia, to learn about ice and frost tube protocols while reviewing the "Earth as a System" lessons. "It was a workshop that was useful and wonderful." Ms. Prusa plans to institute more Hydrology and Phenology protocols in her classroom during Spring semester of 2009.

For two years, Ms. Prusa's students have been keenly involved in the Surface Ozone protocols, rigorously taking measurements on a daily basis. This resulted in a valuable curve of readings that could be applied to the students' research. In addition, Ms. Prusa's students were involved in the early development of the FLEXE pilot teaching module and particularly enjoyed working alongside real scientists, an experience they found to be "unusual, educational and inspiring."

Knowing that GLOBE makes an impact on teachers, who in turn positively influence students to seriously contribute in the gathering of scientific measurements for use in student research, is something that Ms. Prusa has come to appreciate and value. "I really feel that GLOBE is the way to teach my students good science. They are discovering the way the Earth works for themselves and at the very least, it will make them more aware of their environment."

By utilizing the opportunities presented to them through GLOBE teacher training workshops, Mr. Stefan Smolski and Ms. Kathleen Prusa have shown that GLOBE's inquiry based, hands-on science allows teachers to bring meaningful activities into the classroom that positively impact the way students feel about science. Today, more than ever, an understanding of scientific principles, and the problem-solving skills developed through scientific inquiry, are vital components of an education that meets the needs of the 21st century. It is important to have teachers who are not only enthusiastic about these subjects, but who take advantage of ongoing professional development opportunities such as those offered by the GLOBE Program.