Three GLOBE students and their teacher, Melody Tsapranis, from Woodward High School in Toledo, Ohio, were invited to visit Washington D.C. on 18 October 2010 to attend the White House Science Fair hosted by President Obama. Tiffine Guindon and Tazhianna Dean from Woodward High School, and Alexandria Carey, currently a student at Rossford High School, were nominated by Dr. Kevin Czajkowski, Associate Professor, Department of Geography and Planning, University of Toledo, to represent the GLOBE Program at the White House Science Fair. Dr. Czajkowski is one of the 140+ Partners across the U.S. who recruit, train and mentor GLOBE teachers. The GLOBE Program Office asked all U.S. Partners to nominate exemplary science fair projects conducted by their GLOBE students during the 2009-2010 academic school year. All nominees received were sent to NASA who submitted the long list of GLOBE student projects to the Office of Science and Technology Policy. "Back in July I nominated six teams who presented at the SATELLITES conference held at Penta Career Center in Perrysburg, Ohio, in April," Dr. Czajkowski said. 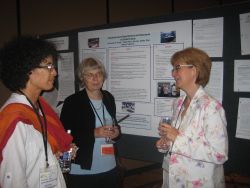 Ms. Tsapranis, the teacher of one of the teams submitted by Dr. Czajkowski, attended the 14th GLOBE Annual Partner Meeting and Professional Development Workshop in Calgary, Alberta, Canada in July 2010. During the meeting, she had the opportunity to discuss the integration of inquiry-based science learning through GLOBE Projects with international educators, also highlighting the research conducted by her now famous students!

The SATELLITES Program is a K-12 outreach program that allows students to work with scientists on real science projects. Students are encouraged to go outside, take observations and complete an inquiry research project to present at the conference. The program is sponsored by Dr. Czajkowski's GLOBE Partnership, the OhioView remote Sensing Consortium, Ohio Space Grant Consortium, the Ohio Board of Regents and NASA. The SATELLITES Program was developed at the University of Toledo and is the educational outreach program of OhioView.

The students' SATELLITES project titled "The Changing Permafrost" analyzed data from Fairbanks, Alaska on frost depth and temperature. Data shows that the permafrost in Fairbanks has warmed nearly three degrees Celsius. Exploring the NASA website, students discovered the effects of the melting permafrost such as the release of additional carbon dioxide and methane gases into the atmosphere.

Following his daily briefing in the Oval Office and a meeting with senior advisors, President Obama viewed science fair projects in the State Dining Room before delivering remarks to all participants in the East Room of the White House. 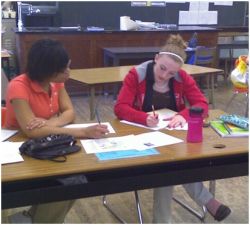 The White House Science Fair celebrated the winners of a broad range of science, technology, engineering and math (STEM) competitions. The Fair fulfills a commitment the President made at the launch of his Educate to Innovate campaign in November 2009, which aims to move American students from the middle to the top in science and math achievement rankings over the next decade. The White House Science Fair kicks off a week that culminates with the USA Science and Engineering Festival on the National Mall in Washington D.C. This event marks the country's first national science festival and is poised to engage more than a million people nationwide. GLOBE will be at this event!

GLOBE Partnership provides universities and other educational institutions the opportunity to help students reach their potential as young scientists by assisting teachers to facilitate hands-on GLOBE Projects, inside and outside of the classroom. Through GLOBE, students gain opportunities to explore scientific questions and share their research results with their peers around the world! GLOBE empowers students, through first-hand activities, to lead initiatives that have a positive impact on their future, contribute to scientific understanding of Earth as a system, and support activities that benefit Earth's environment on local, regional, and global scales.

Read the press release from the Office of Science and Technology Policy.

Read more about the results of the 2010 SATELLITES Conference.

Watch this interview with Woodward High School students about their visit to the White House.

Learn more about how to join GLOBE.