Approximately 350 million people cross the U.S./Mexico border each year, making the stretch of land between the Pacific Ocean and the Gulf of Mexico the most frequently crossed international border in the world. GLOBE schools have monitored this area for many years, producing amazing research reports and sharing their results with community members on both sides of the border.

Two of the most active border cities, El Paso, Texas, located on the banks of the Rio Grande River across the U.S./Mexico border from Ciudad Juárez, Chihuahua, Mexico, has long operated as a solitary community, with residents shuttling back and forth for both work and leisure. Schools in El Paso have participated in GLOBE since 1998. Through the leadership of Dr. Robin Hoffer, GLOBE U.S. Partner from the University of Texas at El Paso (UTEP), strong collaborations between UT El Paso's College of Science and College of Education have facilitated several award-winning GLOBE student projects. 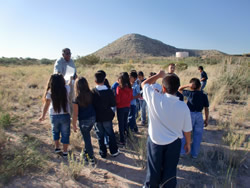 Just 15 minutes from El Paso, the bustling city of Sunland Park, New Mexico, also along the border of Mexico and West Texas, is a hot spot for GLOBE activities as well. Frequently visiting schools in both Texas and New Mexico, Dr. Hoffer encourages K-12 students to include GLOBE in their research. From 5th grade students at Desert View Elementary School in Sunland Park, New Mexico, participating in GLOBE's Climate and Land Cover event last October, to Dominic, a 4th grade student at a nearby school in El Paso, Texas, winning his school's science fair event, to 8th grade GLOBE student Fox Bolduc achieving the rank of Eagle Scout, these young GLOBE scientists are winners! University students at UT El Paso as well as pre-service and in-service teachers from the surrounding areas have also taken an active part in these activities over the years. 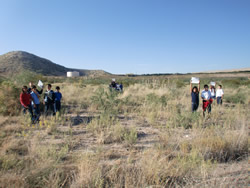 Albert Ortiz, a GLOBE Teacher at Desert View Elementary School in Sunland Park, utilizes GLOBE resources whenever possible in leading environmental studies. GLOBE activities are generally a cooperative effort between Mr. Ortiz and Dr. Hoffer at UTEP, the Department of Education at New Mexico State University (NMSU), and New Mexico University (NMU) Service Learning Program. Students have built space rocket models, downloaded telemetry from Dove-OSCAR 17, participated in the SAREX project with late astronaut Ron Parise aboard STS-35, and experimented with the electromagnetic spectrum, all under the extreme and rapidly changing temperatures of the Chihuahuan Desert. The work of these devoted students was also recognized through a publication by IEEE: Advancing Technology for Humanity, a professional association dedicated to advancing technological innovation through educational activities, for a satellite study deciphering flood damage, in July 2007.

In July 2006, Ortiz was the only Hispanic from the United States to attend the Latin American and Caribbean Regional Meeting in Buenos Aires, Argentina, affording him the opportunity to form relationships with Argentina, Chile, and Uruguay that still thrive today. It was here that Ortiz established a connection to Republic of India Primary School No. 85 in Montevideo, Uruguay. In September 2007, Ortiz assisted a group of students from this school to participate in the science fair of the Scientific Culture Popularization Program utilizing cloud research activities. In April 2009, students at Desert View met with GLOBE Teacher Ana Prieto and students in Patagonia, Argentina, via Skype to discuss land fire and its effects on the environment. Plans are in action for the next collaboration with GLOBE Students in Montevideo, Uruguay. 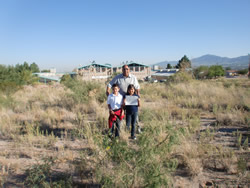 During the week of 10-16 October 2010, GLOBE students were invited to help climate scientists by submitting digital pictures from a local land cover site in the four cardinal directions, along with latitude, longitude and elevation data from a GPS or map tool. Desert View students participated in the Climate and Land Cover Event locally with a photo session led by Mr. Ortiz and Dr. Teresa Kennedy, Director of the GLOBE International Division and U.S. Country Coordinator. Students posed for their photos to the North, South, East, and West, holding signs to designate the direction. The students then submitted their photos to the GLOBE Program, playing a key role in this global effort. More than 200 photos were submitted from all over the world.

Both bilingual and monolingual students at Desert View in the 3rd, 5th, and 6th grades engage in GLOBE Protocols, often leading to conversational debates among students about what they have learned. Special education students participate in GLOBE activities as well, following the path laid out by many GLOBE Community members to meet the specific needs of all students, including GLOBE Trainer Jennifer Locket, who detailed this effort in the GLOBE Offline newsletter in 1999. "Interactive science activities on a global scale have a large impact on students, allowing them to share their data and even perform quantitative and qualitative analyses using data collected all over the world," stated Dr. Hoffer. Students conduct GLOBE research utilizing their proximity to the Rio Grande, which is important since it crosses the U.S. and then into Mexico. However, student research is not limited to these areas. "With the help of Dr. Hoffer, students have also had the opportunity to explore Aden Crater and surrounding Maar Volcanoes. Aden Crater is historically important because astronauts have trained there before traveling to the moon. "These are the kinds of life applications that really resound within the young mind. GLOBE has been good to our students. When former students visit, they still ask about GLOBE," stated GLOBE Teacher Albert Ortiz.

Reaching out into the community, Fox Bolduc, an 8th grade student at St. Mark's Middle School in El Paso, Texas, installed two GLOBE weather stations in October of 2010 at the Carlos Ramirez TecH2O Center, located next to the Kay Bailey Hutchison Desalination Plant, as a part of his requirement for attaining the rank of Eagle Scout. The active troop member had to plan, execute, and then report on the completion of a leadership service project. Ms. Virginia Galaza, Water Conservation Technician at the Carlos Ramirez TecH2O Center, suggested he install two weather stations, provided by Dr. Hoffer, at two different locations around the desalination plant and learning center. 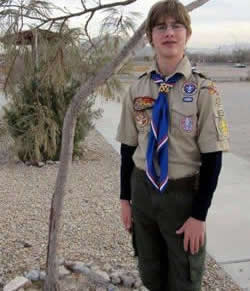 Galaza met Bolduc when his troop approached the El Paso Water Utilities to collaborate and coordinate a merit badge camp. Galaza stated, "Fox was starting to look for a project for his Eagle Scout and we had a couple of GLOBE Weather Stations that had been waiting for two years to be installed at our facility." Fox asked if there was a project that would be useful to help achieve the mission of the TecH2O Center, which serves as an informal provider of scientific programs to regional school districts by offering programs to 5th-grade students and older, in both Spanish and English. Their mission is to provide education and training to foster understanding and appreciation of total water management in the Chihuahuan Desert to customers, visitors, researchers and general the general public. The center also offers professional development workshops for teachers. 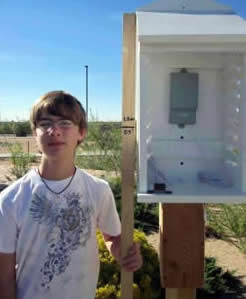 Fox then met with Dr. Hoffer to scope out areas around the desalination plant and to decide where best to place the GLOBE instrument shelters. After learning GLOBE Atmosphere Protocols and correct placement of the shelters, Fox coordinated with Scoutmaster Joe Smith and other troop members to decide on a date to erect the shelters. He made a list of all materials needed and purchased the supplies with money received from donations to the troop. Fox states his project will be lasting because "GLOBE students will be able to continue monitoring the area as long as the shelters remain in place and the GLOBE data are submitted." 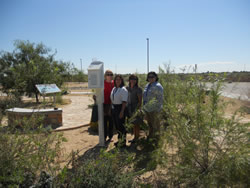 The GLOBE Weather Stations will be used to supplement and enhance outdoor field studies and science programs. Fox Bolduc, with the help of his mentors and fellow troop members, worked hard to have materials donated and installed. The service project included a clean-up effort to remove chicken wire around the Xeriscape Garden and also had a nice sitting bench donated and flat stone used to develop a walking trail to one of the weather stations. Ruth Rodriguez, Water Conservation Technician, has been collecting the data regularly and recording it in the GLOBE database. "We plan on having GLOBE Program educational workshops to feature the future weather stations," she commented. Fox now proudly holds the rank of Eagle Scout and has left a legacy that will benefit many students and community members. 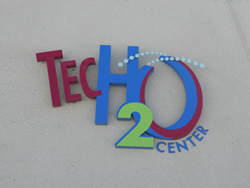 El Paso Water Utilities dedicated the Kay Bailey Hutchison Desalination Plant on 8 August 2007. The $87 million facility has the potential to produce 27.5 million gallons of water per day, making it the largest inland desalination plant in the world. The desalination plant is a joint project of El Paso Water Utilities and the U. S. Army/Fort Bliss. It produces potable water by treating a previously unusable resource-brackish groundwater from the Hueco Bolson Aquifer. The TecH2O Center is a popular destination for students from El Paso school districts to learn all about water using exceptional displays and hands-on activities at the center.

Since El Paso is located in the Chihuahuan Desert, water is a scarce commodity. The GLOBE instrument shelters not only capture and monitor any rain falling around the site, they also record the Max/Min Temperatures of the air and soil each day. These data are then entered into the GLOBE international database and can be compared to other communities near El Paso and other parts of the world. These stations will help the TecH2O Center's 40,000+ visitors per year learn about Soil and Air Temperature, and rainfall patterns in the Chihuahuan Desert.

Read another inspiring story about GLOBE in Southern New Mexico and West Texas: