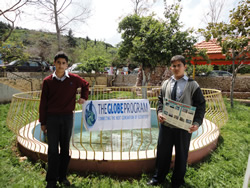 Safir High School in Saida, Lebanon organizes an annual Environmental Science Project aimed at teaching something new about the environment each year. Last year, students maintained a greenhouse where they observed how climate affects the growth of flowers and vegetables. This year, under the guidance of GLOBE Teacher Mrs. Majida Khalifeh, Safir students utilized GLOBE Hydrology Protocols and resources to demonstrate the importance of water. Ocean waters cover nearly 71 percent of Earth's surface and are essential to the survival of all living organisms. 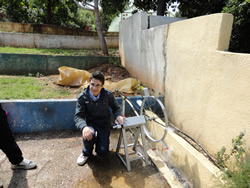 On 7 April 2011, students, teachers, parents, and representatives from local organizations attended an exhibition held in celebration of World Water Day to display the data students have collected throughout the year. Students introduced a drip irrigation system, which preserves water in agricultural fields or gardens, and has proven to be more efficient than other irrigation methods. Students demonstrated how drip irrigation is effective in moving water to its desired location, thus reducing water runoff and other problems such as disease or the spread of weeds. Students also explained the benefits of water turbines as a renewable source of power. Water turbines are designed to operate long term, thus providing sustainable, low cost, and clean energy that does not release pollutants into the environment. Students explained the mechanics of a water turbine and how it can be easily adapted for multiple purposes. 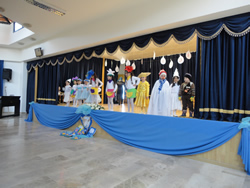 Each grade level focused on a different aspect of water study, together providing a kaleidoscope of visual and interactive information. Kindergarten students prepared a song and a play delivering an important message about different elements of the environment. Students in the play portrayed the four seasons, acting out each season's characteristics and attributes. This is an excellent example of how GLOBE science can be implemented in artistic disciplines and across the curriculum. 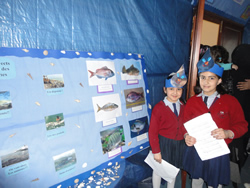 Students in grades one through four simulated an aquarium by covering the walls of a classroom with blue sheets and explained the biodiversity found in the earth's oceans. They focused on marine organisms such as fish, shells, and seaweed, and laid the foundation for the fifth and sixth-grade presentation of the dangers organisms face due to oil, waste, and blast fishing. 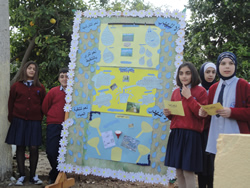 Fifth and sixth graders explored the problem of water pollution, focusing on factors including oil, ships, and sanitation. Seventh-grade students introduced a water purification system, explaining that water purification is essential for the removal of undesired chemicals and biological contaminants, in order to produce water pure and clean enough to be used for drinking. Seventh, eighth, and ninth grade students worked in groups on more advanced topics such as electrical turbines, water filtration, a collection of temperature data, water nitrate, drip irrigation, and other topics of importance. The students achieved great results and, through their projects, displayed the importance of water from an environmental perspective. 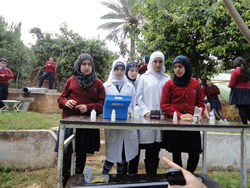 Additionally, students conducted the GLOBE Nitrate Protocol, checking nitrate levels in drinking water to ensure they were within a safe range, and GLOBE Atmosphere Protocols by leading guests in cloud identification using GLOBE Cloud Charts. The hard work put forth by students and teachers to organize this event paid off immensely, as students learned every bit as much by teaching as their guests did by attending. Siham Salman, GLOBE Near East, and North Africa Regional Help Desk Officer stated, "The GLOBE Program plays an important role in teaching students about their surrounding environment on a scientific basis. Students, teachers, and parents work together as a team in order to understand and implement GLOBE Protocols. Teamwork helps in breaking down barriers between teachers and students, making the students more at ease to express their ideas."

The GLOBE Regional Help Desk Office for the Near East North Africa Region has been facilitating GLOBE in Lebanon as well as in all 13 countries in the region for the past two years. Lebanon joined the GLOBE Program 23 November 1998, when Lebanon Minister of Environment H.E. Mr. Akram Shehayeb and United States Ambassador David Satterfield signed the GLOBE agreement in Beirut. In Lebanon, the Association for Forest Development and Conservation works with the Sustainable Development Networking Program and the Ministry of Environment to implement GLOBE activities in the schools.

Read more about GLOBE Teacher Majida Khalifeh in the May 2011 Community Spotlight.