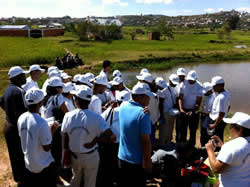 As a previous secondary level biology teacher, Madagascar GLOBE Country Coordinator Mr. Paul Randrianarisoa knows how to implement science in way that resonates with students of all ages. In addition to his GLOBE responsibilities, Radrianarisoa also works as a trainer for the World Wildlife Fund to promote environmental education in Madagascar. "After 12 years with GLOBE I can say that this program provides great support for the promotion of science and environmental education not only for secondary levels but concerning students in all educational systems," he explained. "In general, the majority of young people in Madagascar choose literary courses of study. GLOBE helps to make science more appealing, as there are real environmental questions that need to be answered and problems that need to be solved." 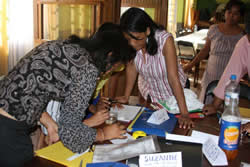 To facilitate further expansion of GLOBE in Madagascar, particularly in secondary education models, detailed plans are underway to introduce the GLOBE Program, focusing on GLOBE's scientific protocols to the curriculum for pre-service teachers as a means of expanding inquiry activities with their future students. Therefore, as new teachers achieve their national teaching certification, they will automatically be GLOBE certified, bringing GLOBE to the schools where they choose to accept employment. 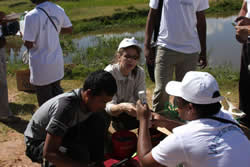 The GLOBE Africa Regional Office, in collaboration with Dr. Elena Sparrow and the Seasons and Biomes team from The University of Alaska Fairbanks and Dr. Rebecca Boger from Brooklyn College, a four year senior college and a member unit of the City University of New York, as well as by Mr. Peter Falcon from the CloudSat Education Team at NASA's Jet Propulsion Laboratory (JPL) in California, and the Malagasy Ministry of National Education, held a training workshop in Antananarivo, Madagascar, in March 2011. Teachers from 20 different regions of Madagascar participated in this workshop where GLOBE Atmosphere, Hydrology, Soil, Land Cover and Phenology Protocols were taught. Dr. Rebecca Boger and Dr. Lala from the University of Madagascar also worked with the teachers on the Mosquito/Malaria Protocol. The GLOBE Africa Regional office supplied 20 weather stations and equipment for the workshop. 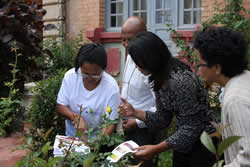 This important event laid the foundation for the next GLOBE Africa Regional Meeting and Training event scheduled to take place in March 2012. During the upcoming training event, participants will access and analyze over 92,000 data that have been recorded to date as well as data currently being gathered as a part of the on-going GLOBE research underway in Madagascar. Through meetings and extensive planning, GLOBE Madagascar has been successful in forming strong alliances, completing important research regarding malaria and many other topics of local interest, and expanding the number of GLOBE-trained teachers in the region. 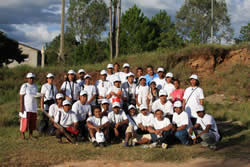 The regional office would like to acknowledge and thank Dr. Elena Sparrow and the Seasons and Biomes team for their continuous support for Africa initiatives. They would also like to thank the Malagasy Education department for their support and pledge to hold the next Regional Meeting, and all other participants, institutions and organizations that contributed to the success of this workshop.

Read about previous achievements of the GLOBE Program in Madagascar: