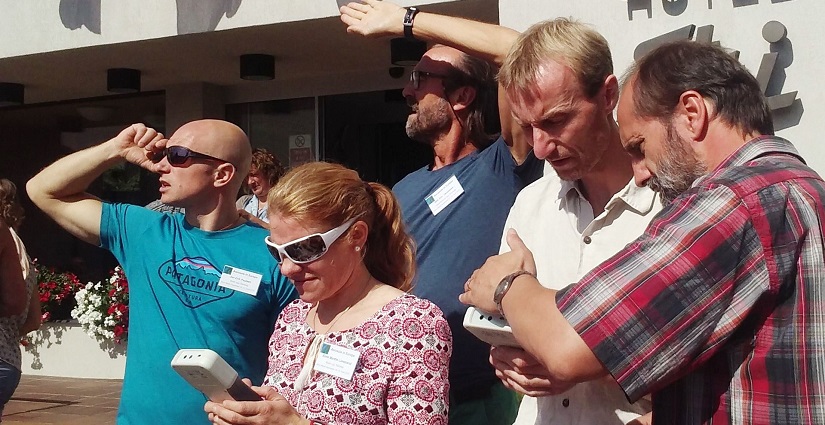 The GLOBE Community in Europe is engaged in a two-year campaign (2014-2016) to learn more about aerosols and the atmosphere. Scientific support comes from Bjørn Samset from Cicero (2015-2016) in Norway and Danielle deStaerke from CNES in France. Elise Hendriks, a GLOBE aerosol scientist from the KNMI (Royal Netherlands Meteorological Institute) in the Netherlands, was involved during the first year of the campaign.

Aerosols are small particles, smaller than 10 micrometers, which are suspended in the atmosphere. Worldwide, most atmospheric aerosol particles are produced by “natural” processes such as erosion of land surfaces -- resulting in dust -- or for example forest fires, chemical reactions between atmospheric gases and volcanic eruptions. Some particles originate directly from humans.  Examples of these are: industry, agriculture, transport (on the land and in the sky), and construction. All of these types of particles then interact with solar radiation (sun light) and this effects our air quality on both a local and global scale.  Studying aerosols can teach us about our changing climate.

In 2014 and 2015, GLOBE students across Europe focused on the atmosphere during two month-long Intensive Observation Periods (IOPs) as part of the Europe Aerosols Campaign.  These took place from 2 March through 8 May 2015 and again from 12 October through 8 November 2015.

Students and teachers used sun photometers to measure the aerosol optical thickness (AOT) of the atmosphere. AOT shows how much of the sun's light is scattered or absorbed by particles suspended in the air. Teachers and students uploaded their data to the GLOBE data entry page.  They then analyzed the data by comparing it to data collected by other schools and to data collected by Earth-observing satellites.  (Scientist Elise Hendriks, along with other GLOBE aerosols scientists, will give feedback on the collected data.  They plan to present their results for the entire campaign.)

The campaign gained momentum at the first international workshop, in the city of Nove Mesto (Czech Republic) where from 16-19 September 53 participants from 25 schools in six countries took part under the guidance of scientists Marianne Lund and Bjørn Samset.  This event was organized by Karl T. Hetland, Norway’s GLOBE country coordinator.  (Hetland fosters “school twinning” as part of the aerosols campaign in Europe.)

As a follow up, another teachers’ training on aerosols was organized by GLOBE France (9-11 October 2015) with 52 participants. See here and the above for a video from the training.

In addition, the Europe Aerosols Campaign team has prepared classroom activities and experiments for learning more about aerosols and the atmosphere. Learn more about these here. The new GLOBE Elementary Aerosols storybook and learning activities, published in August 2015, also help younger students learn about aerosols.  Let the schoolgirl Chloe explain it all to you (see the video below).  This video is in French with English subtitles.