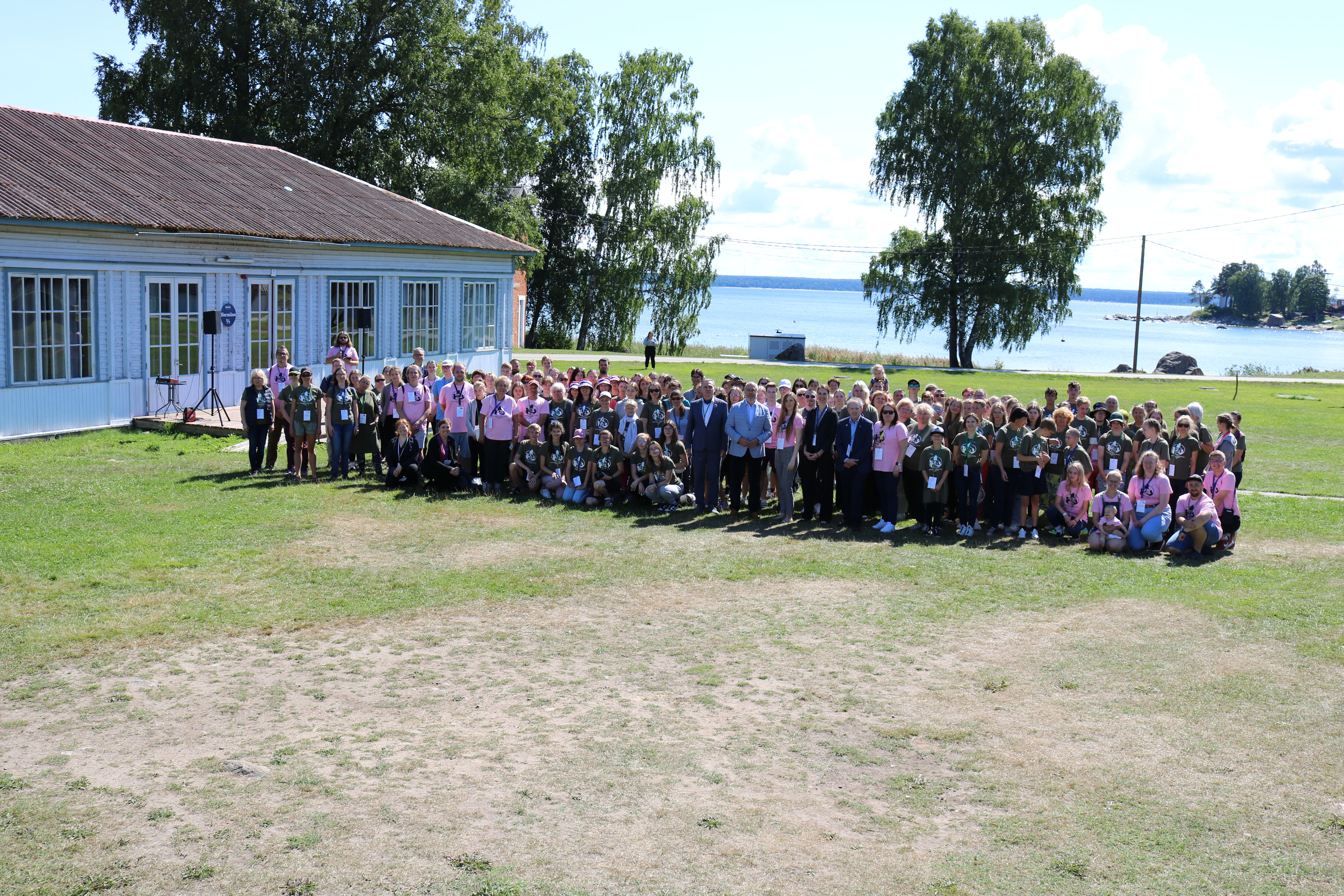 In August, the GLOBE Regional Learning Expedition (GRLE) 2022 took place in Käsmu. The event brought together 160 students, teachers and researchers from Croatia, Czech Republic, Estonia, Germany, Ireland, Lithuania, Slovenia, Ukraine, and the United States to the Käsmu peninsula, which is located in Lahemaa National Park. The participants were welcomed by the President of the Republic of Estonia, Alar Karis; Chargé d'Affaires of the United States Embassy, Gabrielle Cowan; Minister of Education and Science of the Republic of Estonia, Tõnis Lukas; and the GLOBE Implementation Office (GIO) Director, Tony Murphy.

“The GRLE was organized by current and former GLOBE students, offering the participating students a unique experience,” Johanna Raudsepp, Deputy Country Coordinator from Estonia, said. “Over the course of four days, the participants studied various aspects of Käsmu nature in cooperation with NASA and Estonian scientists.”

“Data on tree height and land cover will be used to complement the data collected by NASA satellites. NASA expert Brian Campbell said that all gathered data and data from GLOBE database is compared with data from NASA satellites,” Raudsepp said. 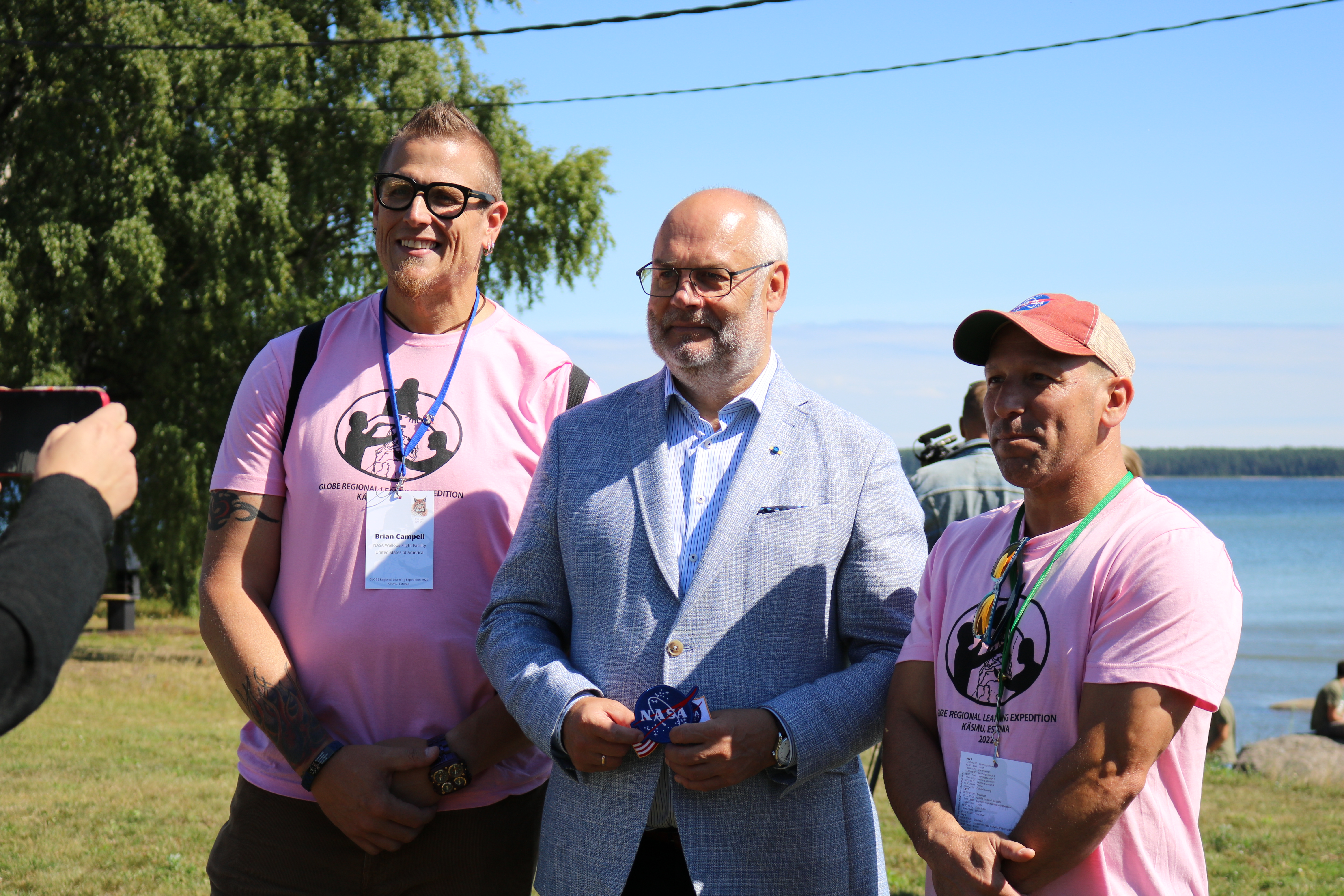 “The data collected during GRLE 2022,” Campbell said, “is probably the most thorough data set that has been gathered in Estonia, since over a hundred people gathered data in the same area using the same methods at the same time.”

“Day One focused on learning GLOBE protocols and cultural exchanges between the participants,” Raudsepp said. “Day Two began with a conference where students from participating countries showcased their GLOBE research projects. In the afternoon, groups of students and supervisors, including scientists from NASA and Estonian universities, went on a learning expedition to put their newly learned skills to use. The groups conducted fieldwork in Lahemaa National Park. Day Three was dedicated to data analysis. Groups prepared presentations and IVSS (International Virtual Science Symposium) reports based on the data gathered during fieldwork. The evening of Day Three was dedicated to fun – groups took part in GLOBE games and put on short plays on the topic ‘GLOBE in the future.’ On the fourth and final day, participants presented the results of their fieldwork.” 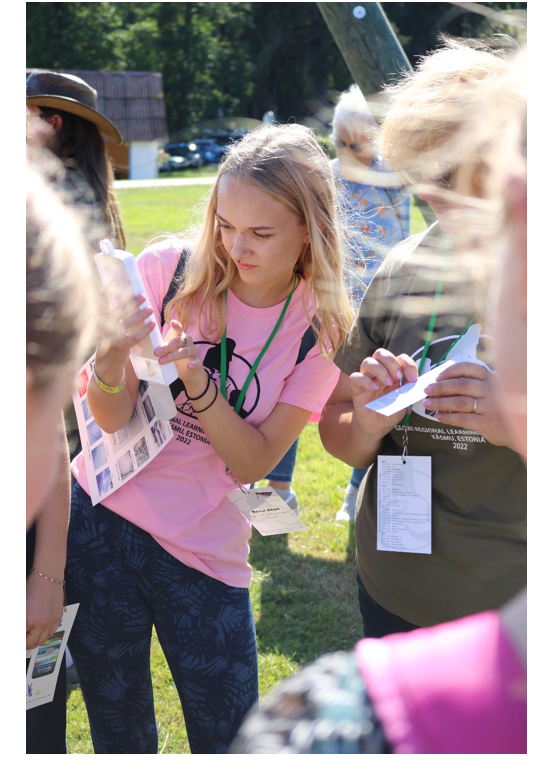 Students learning the atmosphere protocol on Day One

GLOBE alumnus, Uku Andreas Reigo from Miina Härma Gymnasium (now a student at the University of Tartu), said, “I had a great experience conducting an expedition with Peter Falcon from NASA’s Jet Propulsion Lab. We planned the expedition together, guided students and did fieldwork with them. Teaching is a great way to solidify your knowledge on a topic, and I am very grateful to have had this experience.” (“Reigo was one of the young GLOBE members who had the opportunity to accompany an experienced GLOBE trainer and/or researcher on the expedition and to support students throughout GRLE,” Raudsepp said.)

“The young researchers found that the land cover in Käsmu peninsula is much more diverse than on satellite images, mainly owing to ground cover which is difficult to detect from above. Groups researching soils in the area also described a diverse range of soil types, which was reflected in the diverse land cover as well. Groups studying microclimate investigated connections between land cover, tree height and atmospheric indicators. Hydrology groups studied different locations in Käsmu bay. One group noted low levels of dissolved oxygen at Käsmu harbor, possibly due to a high amount of algae which was thriving in the harbour thanks to higher phosphorus levels,” Raudsepp said. 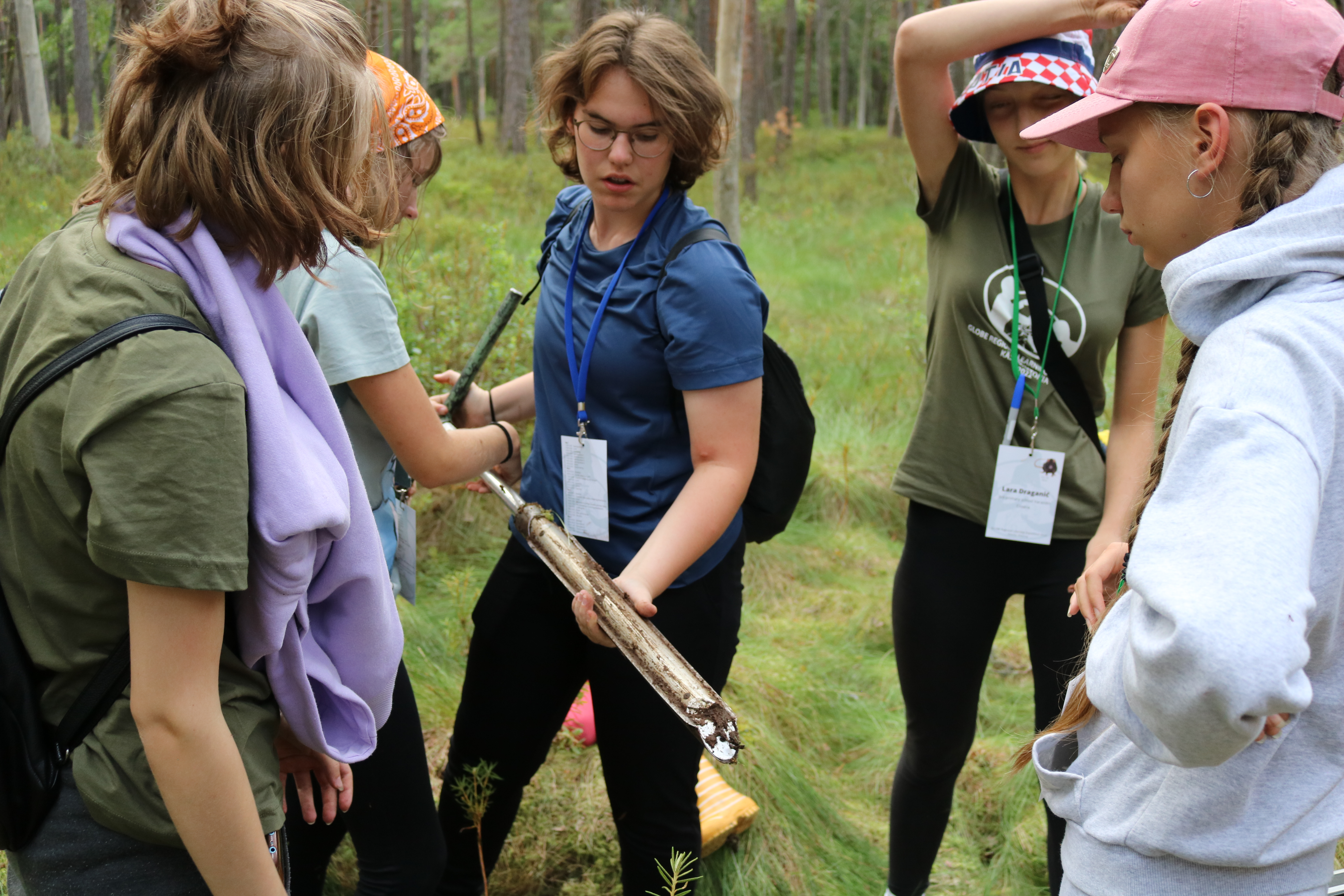 The Estonian GLOBE team and students have been an example within The GLOBE Program. Despite the difficult circumstances of recent years, the GRLE is taking place for the 25th year in a row. "Over the last three years, the world has been shaken by various events, but climate is constant and environmental research cannot be paused,” Raudsepp said.

“During the expedition,” GLOBE Estonia Country Coordinator Laura Altin said, “students acquired knowledge and skills to investigate their own environment and assess the impact of events on the natural environment near their homes. Studying together with NASA scientists allows students to understand the importance of these daily measurements.”

Hans-Kristjan Raid, a student at Kilingi-Nõmme Gymnasium, said “It was an awesome experience. I got to contribute to planning the event, work together with students, teachers and GLOBE trainers from many countries, and was responsible for social media during the event.” Raid also emphasized the importance of having high-level officials opening GRLE, “It gave us a sense of security and hope that what we’re doing at GLOBE is important and that environmental education is valued. It’s not every day that you get to meet the President of Estonia!” 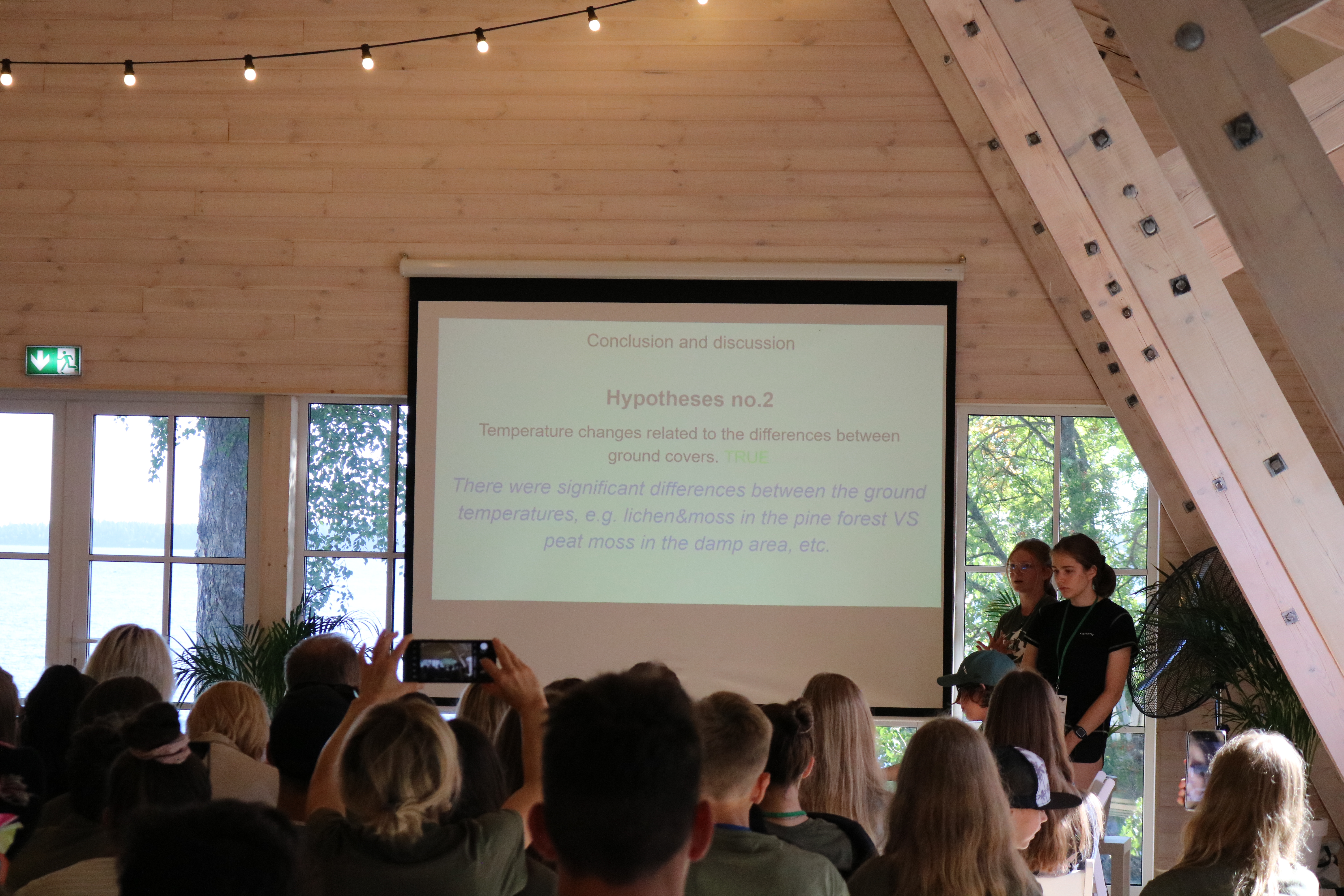 “The event was extensively covered in local media outlets,” Raudsepp said. “GRLE 2022 reached over 20,000 people via GLOBE Estonia’s social media, and over 1,000,000 people through NASA and The GLOBE Program’s media channels. The expedition was organized by The GLOBE Program in Estonia, in cooperation with the Embassy of the United States of America, the Ministry of Education and Research of the Republic of Estonia, the Center for Environmental Investments, and GLOBE students and alumni.”

“GLOBE Estonia has set an example, even during the pandemic, as this is the 25th year in a row that an expedition has been held there,” Raudsepp said. “Students got to understand the significance of their daily measurements by interacting with NASA scientists. Experienced students and alumni got to participate in organizing the event, learning new skills along the way. The event was visited by several high-level officials and was covered in local media, social media, as well as on NASAs website.”