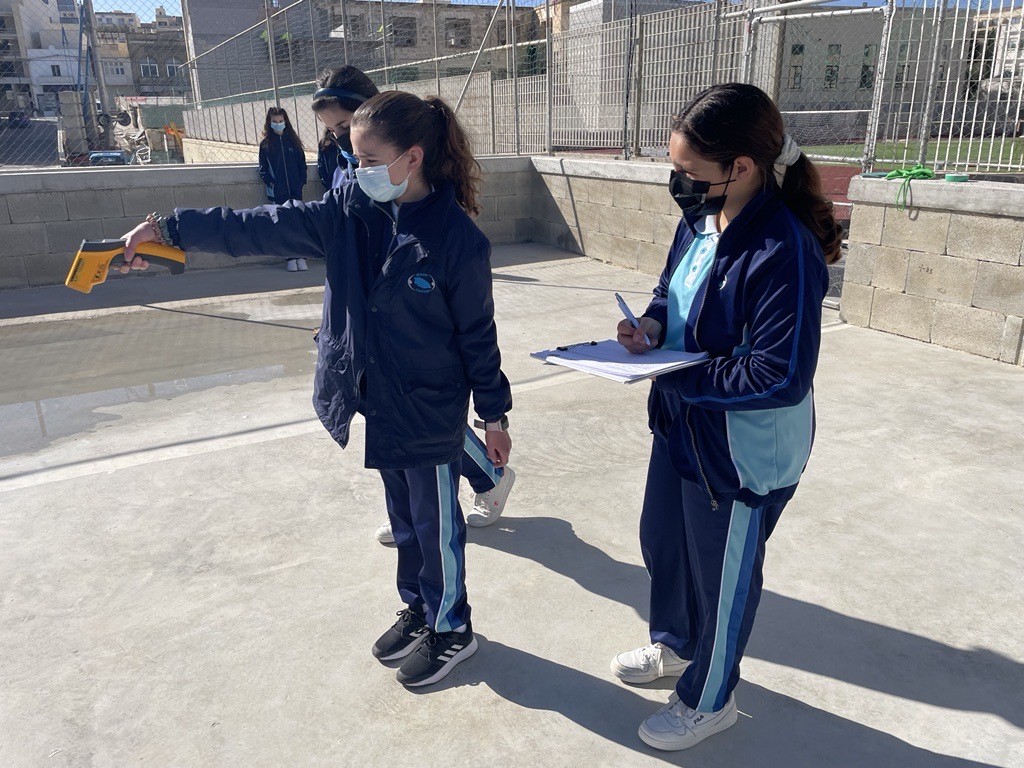 GLOBE Malta collaborated with Xrobb l-Għaġin Nature Park and Sustainable Development Center for the second consecutive year; this time focusing on the Urban Heat Island Effect (UHIE). The Park consists of over 155,000 square metres, and is situated on a jutting peninsula with scenic views, including the Delimara peninsula and the white cliffs of Munxar.

“The campaign was a successful one,” Ramona Mercieca, GLOBE Malta Deputy Country Coordinator, said, “not only exposing new schools to The GLOBE Program, but actually having them register and become new GLOBE schools! The participants really enjoyed time outdoors, collecting data, and sharing their findings. There is great enthusiasm for projects like this, and we look forward to more GLOBE observations during the new scholastic year 2022-2023.”

“Nineteen State and Church schools from across Malta took part in the GLOBE Cooling Down Students’ Investigation which explored the UHIE in Malta. The schools suggested immediate action to counter the lack of trees and high urbanization that give rise to this phenomenon.”

“In November 2021, GLOBE Malta and the Education for Sustainable Development (ESD) Program at Xrobb l-Għaġin launched an ambitious scientific investigation which gave the students an opportunity to enjoy meaningful time outdoors and be involved in data collection,” Ramona Mercieca said. “In this STEM project, students had to use an infrared thermometer to collect nine temperature readings from homogeneous surfaces for five days monthly throughout the scholastic year.”

“The goals and objectives of the program empowered students by participating in a citizen science investigation that generated new scientific data about the UHIE. It induced critical thinking about their surroundings and instilled a sense of belonging to an international community that contributes valuable environmental scientific data used in so many beneficial ways by scientists, schools, and individuals worldwide.”

“I wished that local students would witness the reality of the UHIE and the drastic ground ST differences between various ground surfacing, especially where there is complete absence of trees and vegetation compared with natural areas,” Esther Sammut Carbone, ESD teacher at Xrobb l-Għaġin Nature Park, said. “That goal was definitely reached! I also believe that students can be prominent advocates in local environmental issues, one of which is the lack of trees and vegetation which are under constant threat.” 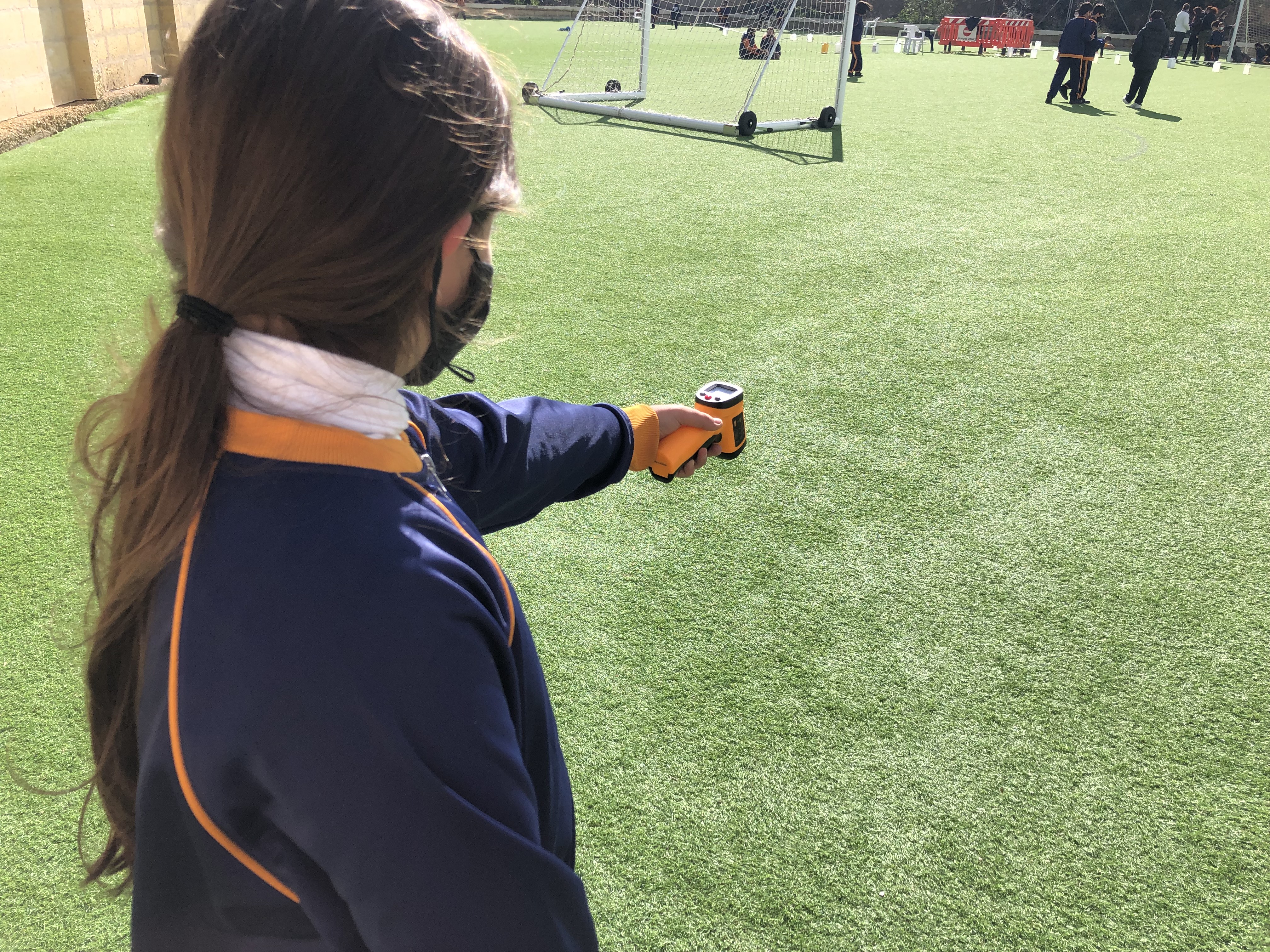 “An informative training webinar launched the project in November 2021, and it introduced the students and educators to The GLOBE Program, GLOBE Surface Temperature Protocol, and the use of the IRTs (infrared thermometers),” Esther Sammut Carbone said.

Data was shared by uploading it to the GLOBE database, and among several participant schools who used it to answer their research questions, including “How does surface cover affect surface temperature?” and automatically contributed to the GLOBE UHIE/Surface Temperature Field Campaign for the 2021-2022 school year.

“I would like to thank you for this opportunity,” Krista Rizzo, a teacher at St. Dorothy’s Sliema, said. “The girls enjoyed every minute of this experience, including discussing our findings.”

During a closing webinar, students shared their data and presented their findings. Upon witnessing the huge difference between the temperatures of grounds covered in tarmac, concrete, artificial turf, and natural grass, and also comparing temperatures of built-up areas and open natural spaces, the students voiced their concern about the UHIE and urged responsible authorities for immediate action.

Students proposed the planting of local trees, shrubs, and plants, together with the use of cool surfaces as their two preferred effective ways to mitigate the dome of hot air in town centres. Other measures that they would like to see implemented (for a better future in line with the Sustainable Development Goals) included green roofs and covering concrete walls with climbers.

Elizabeth Canellakis, Public Affairs Officer at the U.S. Embassy Malta, said, “Congratulations to all the participants in the GLOBE Cooling Down Investigation! The U.S. Embassy is proud to support The GLOBE Program, which is sponsored by NASA, the U.S. agency responsible for aeronautics and space research, and a leader in scientific discovery worldwide. We are delighted that the infrared thermometers we purchased for GLOBE Malta were instrumental in your investigations into the Urban Heat Island Effect phenomenon.”

“The whole experience, including the complementary synchronous sessions, exposed the participants to Education for Sustainable Development (ESD) themes other than the UHIE, such as climate change, and their relation to the carbon cycle,” Esther Sammut Carbone said. “ESD themes are an integral part of the ESD Program at Xrobb l-Għaġin Program and the GLOBE Cooling down student investigation provided a means to this end through the data collection, exposure to several ESD themes, and mobilizing for action to bring about change.”

“Furthermore, it exposed all participants to other relevant environmental observations that anyone can engage in as a citizen scientist; for instance, cloud cover, sky conditions, and tree height measurements, using The GLOBE Program’s app, GLOBE Observer. This initiative provided a STEM opportunity to all participants thanks to the hosting GLOBE scientist, Dr. Kevin Czajkowski, UHIE campaign coordinator and director of the Geographic Information Science and Applied Geographics Lab at the University of Toledo, during both webinars.”

“It was great to participate in your wonderful program,” Dr. Czajkowski said. “You are doing such a great job with the teachers and students.”

“From the enthusiasm of the participants, and the feedback received, including from international guests present at the webinars, we proudly conclude that this was a very successful campaign and the second edition is already being planned.”

Teachers are looking forward to it, as confirmed by Edmund Pace, Head of Żejtun Primary School B, “We definitely want to participate next year.”

Ramona Mercieca said, “The educators who motivated their students to keep up the commitment throughout the observation period were key to the success of the whole campaign.”

“The project opened collaboration opportunities on local levels for several participants. In fact, some schools collaborated using the data shared on the GLOBE database, and additionally submitted a report to the 2022 GLOBE International Virtual Science Symposium in March 2022."

“This investigation not only gave the opportunity to the students to collect data and analyse it, thus exposing them to STEM education, but introduced schools to The GLOBE Program,” Ramona Mercieca said. “Indeed, some of the participating schools registered with The GLOBE Program, have successfully completed the online training and are now new, promising GLOBE teachers!”