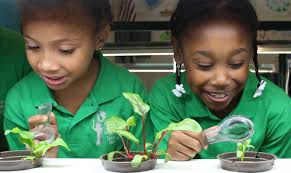 The "Green STEM" report focuses on specific projects that students and their teachers have undertaken in New York City schools, including:

The Green STEM report was prepared by the National Wildlife Federation (NWF) education staff, with the help of a NYC Green STEM advisory board of educators.

A national leader in environment based learning programs, the NWF has been bringing high-quality education to America's K-12 classrooms for 50 years. NWF has done this by developing leading curricula such as its acclaimed NatureScope series and NASA-supported climate curriculum, producing its award-winning children's publications Ranger Rick and Ranger Rick Jr., and using the school buildings and grounds and natural science to engage students in stimulating and effective STEM-based learning.

In 2008, NWF became the U.S. host for the international Eco-Schools program. Founded by the Foundation for Environmental Education, Eco-Schools has emerged as the largest green schools program in the world. Since its U.S. launch in 2009, more than 3,200 schools nationwide have registered and used this program to support real-world learning and problem solving both inside and outside the school facility. NWF's EcoSchools USA and Schoolyard Habitats™ programs provide opportunities for students to become inspired and engaged in exploring the STEM disciplines through the lens of environment based programming or "Green STEM."