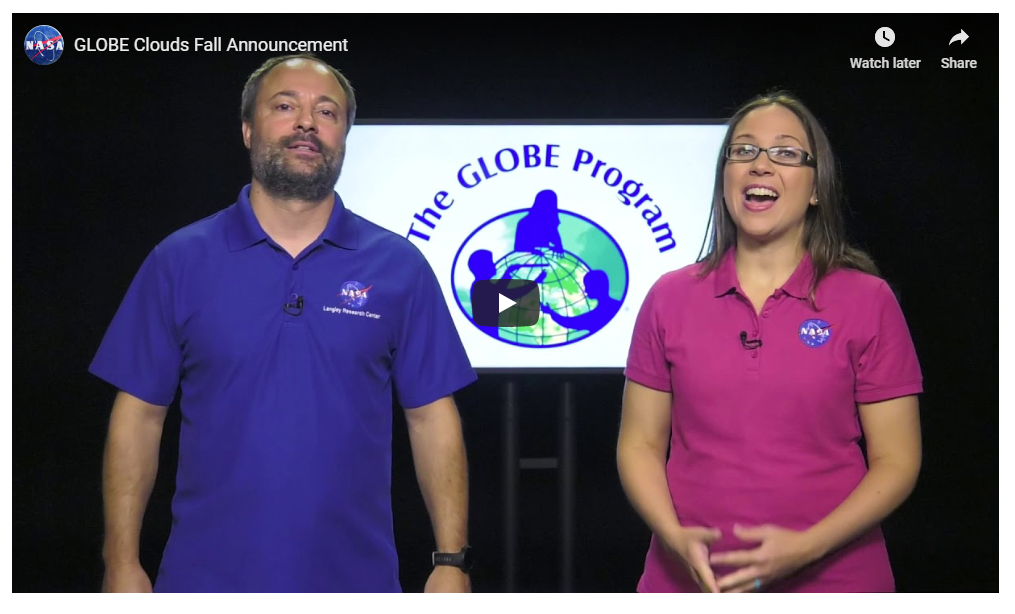 Who knew being a scientist could be as easy as pointing your phone at the sky?

For the second year in a row, NASA and The GLOBE Program are asking citizen scientists to take out their phones and report what kinds of clouds they see.

From October 15 to November 15 citizen scientists young, old and in-between can submit up to 10 cloud observations per day using the GLOBE Observer app or one of GLOBE's other data entry options (for trained members). Participants with the most observations will receive a personalized thank you from a NASA scientist.

"What excites researchers about GLOBE observations is the ability to see what’s up in the sky from volunteers’ perspectives all over the world. From thin, high clouds that are hard for satellites to detect, to dust storms that impact our daily lives, these observations play an important role in better understanding our atmosphere. We want to do a data challenge in the fall and see if there are any differences from what was observed during the spring data challenge of 2018," said Marilé Colón Robles, lead for the GLOBE Clouds Team at NASA's Langley Research Center in Hampton, Virginia. "What our eyes can see is difficult to fully duplicate with instruments. Merging these views is what makes a complete and impactful story."

At Langley, scientists work with a suite of satellite instruments known as the Clouds and the Earth's Radiant Energy System (CERES). Though they are highly sensitive instruments, it can sometimes be difficult for scientists to pick out cirrus clouds from snow cover in their imagery since both are cold and bright. For example, by comparing satellite images from a particular area to data submitted by citizen scientists on the ground, researchers can differentiate between the two.

In addition, lucky observers might make an observation while the Cloud-Aerosol Lidar and Infrared Pathfinder Satellite Observation (CALIPSO) is overhead. CALIPSO is a joint mission between NASA and the French space agency, CNES, that uses laser pulses to measure clouds and atmospheric aerosols. Citizen scientists who make observations at the same time and place as CALIPSO will receive an emailed satellite comparison of CALIPSO's measurements showing features such as high clouds, dust and smoke. Scientists are especially interested in these observations to improve their understanding of dust storms. During the challenge, make sure you turn on daily satellite notifications in the app or use this satellite overpass website to see the schedule for your location.

"Last year’s challenge gave researchers special glimpses into cloud types around the world. Photographs provided by observers gave insight into events such as dust storms and wildfires. Our hope is to once again learn from the community and together study our atmosphere," said Colón Robles.

The 2018 data challenge, which took place in the spring, received more than 56,000 cloud observations from more than 15,000 locations in 99 countries on every continent, including Antarctica. More than 27,000 new users registered for the GLOBE Observer app during the challenge.