The Science of Contrails - S'Cool

The Science of Contrails

The Science of Contrails

Contrails are clouds formed when water vapor condenses and freezes around small particles (aerosols) that exist in aircraft exhaust. Some of that water vapor comes from the air around the plane; and, some is added by the exhaust of the aircraft.

The exhaust of an aircraft contains both gas (vapor) and solid particles. Both of these are important in the formation of contrails. Some elements of the exhaust gasses are not involved in contrail formation but do constitute air pollution. Emissions include carbon dioxide, water vapor, nitrogen oxides (NOx), carbon monoxide, hydrocarbons such as methane, sulfates (SOx), and soot and metal particles.

Are there different types of contrails?

Contrails are all made of the same materials and are formed in the same way, but exist for different lengths of time. Because of the differences in contrail "life-spans", contrails can be divided into three groups: short-lived, persistent (non-spreading), and persistent spreading. See the Contrail Formation Guide [PDF] for more information on how contrails form. 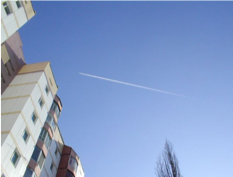 Short-lived contrails look like short white lines following along behind the plane, disappearing almost as fast as the airplane goes across the sky, perhaps lasting only a few minutes or less. The air that the airplane is passing through is somewhat moist, and there is only a small amount of water vapor available to form a contrail. The ice particles that do form quickly return again to a vapor state. 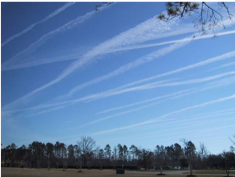 Persistent (non-spreading) contrails look like long white lines that remain visible after the airplane has disappeared. This shows that the air where the airplane is flying is quite humid, and there is a large amount of water vapor available to form a contrail. Persistent contrails can be further divided into two classes: those that spread and those that don't. Persistent contrails look like long, narrow white pencil-lines across the sky. 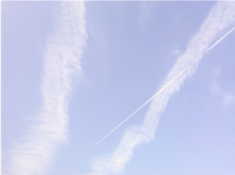 Persistent spreading contrails look like long, broad, fuzzy white lines. This is the type most likely to affect climate because they cover a larger area and last longer than short-lived or persistent contrails.

Contrail cousins are things that look like contrails but actually arise from a different physical process. For example, under the right conditions you will see vapor trails form from the wingtips of a jet on takeoff or landing. This phenomenon results from a decrease in pressure and temperature in the wingtip vortex. If conditions are right, liquid water drops form inside the vortex and make it visible. These evaporate very quickly after they form.

Can contrails move, or do they stay in the location where they were formed?

Because contrails are formed at high altitudes where the winds are usually very strong, they will move away from the area where they originated. Often, when we look up into the sky, we will see old persistent contrails that formed far away but moved overhead because of the wind.

How are contrails different from other clouds?

Contrails are "human-induced" clouds since they are formed by water vapor condensing and freezing on particles from airplane exhaust. Contrails are always made of ice particles, due to the very cold temperatures at high altitude. Other types of clouds can be formed by water vapor that condenses on particles which are present in the atmosphere due to many sources, such as from volcanoes or dust storms, not specifically from aircraft exhaust. Those clouds are sometimes made of water droplets, and sometimes ice crystals, depending on the temperature where they form.