How to Compare My Cloud Observations with Satellite Data - S'Cool

How can I tell if my observations are correct?

We encourage you to look and compare your observations to satellite data. You may still ask yourself if it was correct. Note how much of your report is about the same as the satellite data on the match table. Here are some suggested comparisons:

How can my observations help researchers?

Researchers are interested in your viewpoint of cloud observations compared to satellite data for various reasons. Remember, satellites do not report cloud types, but do report cloud altitude, cloud cover, cloud opacity, and cloud phase.

1. Satellites can only see the top of clouds

Some instruments on satellites may not be able to detect cloud layers that are below a cloud layer higher above.

What to look for: On your Satellite Match Table, look for instances when you observed and reported low- and/or mid-level clouds, and the satellite data reported is for cloud layers above your report.

2. Clouds that are transparent are hard for satellites to detect

Not all clouds are created equal, and that includes how they interact with energy. Do all clouds cast shadows? No, each cloud type interacts differently with the energy coming from the Sun. Opacity, or how the cloud looks, gives us an idea of how they are interacting with the Sun's light.

What to look for: On your Satellite Match Table, look for instances when you observed transparent cirrus clouds and see if the satellite was able to detect them. These types of cirrus are called sub-visible cirrus. Some instruments are able to detect them, others cannot.

3. Presence of Contrails or clouds produced by airplanes

Contrails are very thin clouds and can be hard to detect by satellites. Your observations are the best method to keep track of the number of contrails around the world.

What to look for: On your Satellite Match Table, look for instances when you observed contrails. Note if the satellite reported back high-level clouds. If it did, then you can look for the image found at the bottom of the page and see if you can notice the contrails on the image. Use the “How to read a satellite match” to find the satellite images on your satellite match table. Use the help pages below on how to read satellite data made for each satellite that you can possibly match to with your observations. If the satellite did not report any high-level clouds, then you know that it was not able to detect them.

4. Clouds present when there is snow or ice on the ground

Not everything that is white a cloud, especially from a satellite’s top-down view. Read the Earth Observatory for Kids newsletter titled Clouds or snow? A Satellite Mystery. See GOES 16 images of the Winter Weather Bomb in January 2018 and see if you can note where the clouds are and where is the snow!

What to look for: On your Satellite Match Table, look for instances when you chose “yes” for snow/ice in your surface conditions report, underneath the match table and reported clouds. 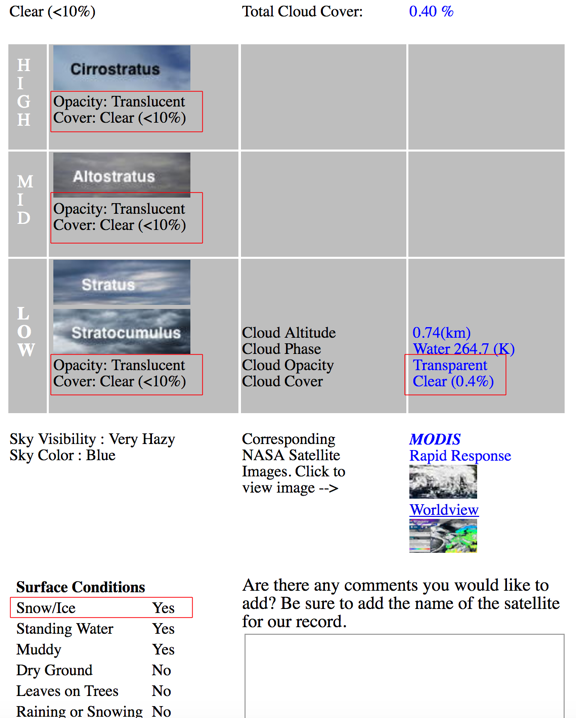 Use the following to learn how to interpret satellite data on your match table.
- GEO (Geostationary Earth Observing) Satellites
- Interpret MODIS Rapid Response and Worldview images.