Student Research Symposia goes virtual in a time of pandemic

“We got the feeling in March it was not going to happen.”

That’s Jen Bourgeault, U.S. Country Coordinator for the GLOBE Program, describing the impact of COVID-19 on this year’s Student Research Symposia (SRS), which were scheduled to begin in April and May in six regions of the country. The crisis called for collecting a lot of input from GLOBE participants, reflecting on both the legacy and responsibilities of the SRS program begun in 2016, and coming up with a new plan.

“We sent a survey to the teachers asking them do you think you can come, could you come in the fall, or would you best be served by a virtual event?” Jen said.

The results were dramatically split, depending on a number of factors, including geography. “Most startling to us was the clear divide between students and teachers in different places. Most weren’t willing to follow through with an in-person event because their COVID numbers were high.” But even areas with low COVID numbers were reluctant. The GLOBE Partner in Alaska, who at the beginning was still committed because numbers were low, as the weeks passed, finally told Jen they shouldn’t host at this point because participants coming from very small Alaskan villages with varying access to hospitals would be put at very high risk.

Some students did not have reliable Internet capability, so connecting to a virtual SRS was not an option. “Some of our teachers said they could pull it together, but we could see the access and tech issues. And, if I read into it, teachers’ stress levels.” In the pandemic, many teachers weren’t sure how schools would finish out the school year. 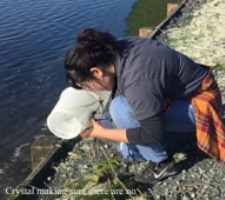 The option to outright cancel didn’t work for many GLOBE projects. “The deadline for the International Virtual Student Symposium (IVSS) was around March,” said Jen, “so at about the same time this was happening, schools were finishing their projects and submitting to that. But if a teacher had planned to have students finish for the Student Research Symposia in April or May, they could not make the IVSS March deadline. We thought we should have something for these students.”

Past SRS evaluations show that teachers and students most highly value having a conversation with scientists about their work. “That’s what makes a difference,” said Jen. “We wanted to offer them a chance to get feedback on their projects but didn’t know if we could manage it.” Individuals’ situations could change on a dime, especially their health. “The idea for me is that SRS is for everybody, but we’d already lost half of the students because they didn’t have the tech.”

Jen consulted with the two primary GLOBE funders (the National Aeronautics and Space Administration/NASA and Youth Learning as Citizen Environmental Scientists/YLACES) and the SRS Leadership Team for guidance and help recruiting potential expert reviewers. “I didn’t know if we would get two or three or 60 projects submitted,” Jen said, so the number of reviewers needed was a moving target.

The solution: a virtual discussion board where GLOBE teams could post their investigations. Expert reviewers would read the material and post their comments. This preserved the student/reviewer interchange that participants value, although the conversations would not occur in real time.

In the final count, 31 projects were submitted representing 12 schools from eight states, 12 teachers, and 63 students. Half of the projects had already submitted to the IVSS, so there were 15 additional GLOBE projects that had accessibility to the required tech. All of the teachers had participated in GLOBE before, Jen said, and all had been mentored by GLOBE Partnerships. A typical year sees over 110 projects from 250+ students at the in-person symposia.

The decision to cancel travel, hotel, and meals commitments fortunately had minor financial impact. “Luckily, all of the deposits were refunded,” said Jen. “A lot of hotels were just willing at that point. A couple asked if we wanted to hold a commitment for next year, but there are too many unknowns. We had just awarded all this travel funding, about $60,000, and started collecting information to make plane reservations. Little participant support money had gone out, and we got back what had.”

The virtual discussion board concept did not come without initial glitches, Jen explained. “On April 7, we made the big announcement [about the change of plans] and asked everybody to upload by May 1. We would do our professional reviews May 2-15.”

The GLOBE website is set up so that schools can post their research at any time of the year. “The original model was, go there, submit the way you usually do, select the SRS button, and get a tag. We watched that for a while but there were no submissions. We found out that the report upload tool had been shut down and was awaiting a software patch,” Jen said.

Predictably, this caused confusion among teachers trying to submit their work. “They were writing to me, Jen, we can’t upload, we can’t get confirmation, what’s going on?” The workaround solution was to create a discussion board. “The Community Support Team dug through emails to see where everything was, got them up on the discussion board, and the United States GLOBE Office created a spreadsheet that went out to GLOBE Partners and STEM professionals to sign up as reviewers.” 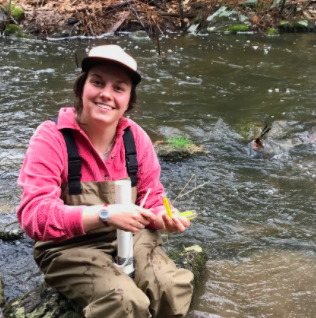 Eventually, University of New Hampshire Ph.D. and Master’s students and faculty members (see image of Eliza Balch, grad student reviewer, at right), faculty from other GLOBE Partnership institutions, and scientists from the USDA Forest Service stepped up to review the GLOBE projects, a total of 32 professionals. Three reviewers appraised each project except for those that had already participated in IVSS, which had two.

The discussion board also gave project teams the opportunity to read and comment on other students’ work, an activity that takes place at in-person student symposia. “But that didn’t happen,” said Jen. “It was just so chaotic at the end of the year. We hope everybody read their own comments from reviewers, but a lot of schools finished early, and we didn’t hear from a lot of teachers after.”

Unfortunately, there will not be a 2021 Student Research Symposia as the pandemic continues during the key planning time; when hotel reservations are made for the following spring.  “I have a lot of hope this won’t impact future participation,” Jen said. “Our evaluations are awesome. Funders see its value. I don’t think this will be a setback in the long run, except maybe for 2021.”

“All of the 2020 hosts had committed to 2021 but we haven’t discussed 2022,” said Jen. In the bigger picture, Jen is concerned about the long-term viability of participating sites, as science centers and universities face potential funding cuts.

For now, Jen and her staff are considering creative suggestions for how the SRS program can go forward. “We’re looking to provide an experience that better supports students doing research. That means working on increasing the number of STEM professionals involved in our program and our capability to match them with students earlier in the research process. A lot of huge ideas are in the mix.”