All About ICESat-2 - Trees around the GLOBE

Trees Around the GLOBE Campaign - Join us!

ICESat-2 Elevates Our View of Earth

The NASA Ice, Cloud, and land Elevation Satellite-2 (ICESat-2) launched on September 15, 2018 at 6:02am PDT from the Vandenberg Air Force Base in California, USA. The ICESat-2 satellite uses an on-board laser altimeter system to measure the height of Earth. Measurements of ice sheets, sea ice, trees, bodies of water, mountains are all part of what ICESat-2 measures.

The Ice, Cloud, and Land Elevation Satellite-2, or ICESat-2, will measure the height of a changing Earth, one laser pulse at a time, 10,000 laser pulses a second. Slated for launch in 2018, ICESat-2 will carry a photon-counting laser altimeter that will allow scientists to measure the elevation of ice sheets, glaciers, sea ice and more - all in unprecedented detail.

Our planet's frozen and icy areas, called the cryosphere, are a key focus of NASA's Earth science research. ICESat-2 will help scientists investigate why, and how much, our cryosphere is changing in a warming climate. The satellite will also measure heights across Earth's temperate and tropical regions, and take stock of the vegetation in forests worldwide.

ICESat-2 will provide scientists with height measurements that create a global portrait of Earth’s 3rd dimension, gathering data that can precisely track changes of terrain including glaciers, sea ice, forests and more.

While many of ICESat-2’s discoveries are yet to be imagined, the satellite mission has four science objectives:

Why does this matter to the this Campaign?

Students will be able to compare their tree data, as well as tree height data from the NASA GLOBE Observer citizen scientists, with the ICESat-2 satellite data. All this data can serve as data for student research projects, locally and for the United States SRS and IVSS.

Scientists from the ICESat-2 Mission will periodically review the tree height data collected by the GLOBE community throughout this campaign. The data will allow scientists to compare the GLOBE data to the ICESat-2 data and in potential professional research. 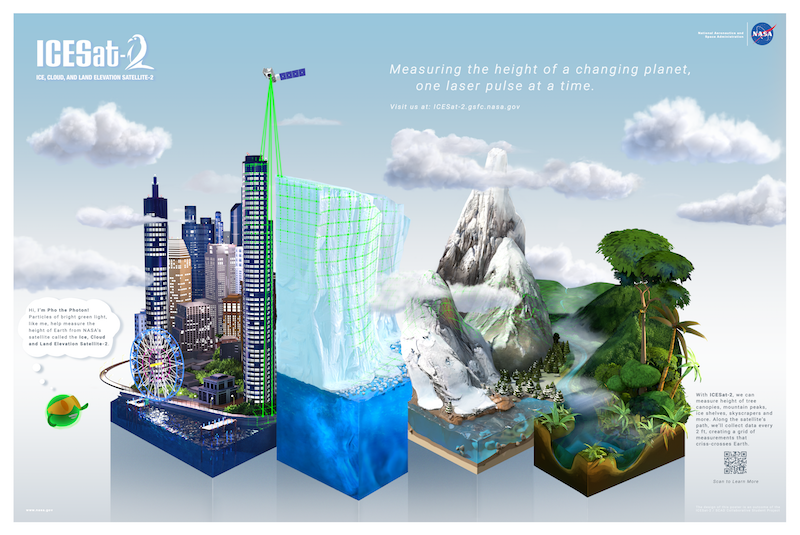 Want to learn even more about the ICESat-2 Satellite, visit http://icesat-2.gsfc.nasa.gov/.