In the spring of 2017, the GLOBE Program—an international science education initiative funded by NASA and supported by The National Oceanographic and Atmospheric Administration (NOAA), the National Science Foundation (NSF) and the U.S. Department of State—held six regional Student Research Symposia where teachers and students from schools across the country shared the results of their field investigations using GLOBE Program data collection protocols.

Rick Sharpe calls himself a “retread,” because he “only” started teaching at age 52. But Rick is more than a GLOBE educator—he’s an active ambassador for the program.

“When I started teaching earth science, I was looking for something, some kind of vehicle, to use genuine science. I didn’t have a clue how to do it,” Rick said. “I went to Green Bank Observatory to study the GLOBE protocols and fell in love with it. It fits our science standards perfectly, it’s logic-based…it seemed like a godsend.”

Rick has made GLOBE an essential component of his environmental science teaching at Huntington High School in Huntington, West Virginia for 11 years, but he has also become one of the program’s biggest advocates. He’s a GLOBE trainer for teachers throughout his school system. He holds county-wide research symposia to widen the field of candidate teams for the GLOBE regional event. He’s prepped his high schoolers to show hundreds of elementary school students how to use GLOBE hydrology and surface temperature protocols and helped their teachers prepare follow-up lesson plans.

Rick’s advocacy for GLOBE extends statewide as well. “With support from Fairmont State University, we got a grant to prepare earth science teachers for certification in West Virginia and GLOBE is a part of that,” he said. “I would love to come up with a lab-based class at the collegiate level based on the GLOBE protocols.”

Rick’s GLOBE work has taken him, well, around the globe as well. “We took a team to the GLOBE Learning Experience in New Delhi four years ago and entered the Virtual Science Fair. We had three finishers in North America and one of our teams was in the top three.”

For Rick and his students, GLOBE is very local

Although Rick and his co-teacher Carla Snell (also a major GLOBE contributor at HHS and avid promoter of the program) have used several GLOBE protocols, one in particular has critical meaning to his students and their home. Huntington High is not far from the Ohio River, and very near one of the river’s tributaries, Four Pole Creek, which has become critically polluted with e-coli. “The creek is 12 miles long and runs through the city and the county with heavy runoff, straight piping into the creek in rural areas, and aging and broken sewer pipes. The e-coli is severe,” said Rick. “We’ve made it a longitudinal study using GLOBE protocols that measure oxygen, nitrates, conductivity, transparency…we take samples on at least one part of the creek every week.” The students also collect macro-invertebrates and look at the number of impervious surfaces in their watershed area, another factor that contributes to water runoff into the creek.

With enough longitudinal data, and comparative data from other sources (something Rick says is difficult to come by so far), the hope is to be proactive with the students’ work. “We want to make our results known,” he said. “We need to try to get the city and the county to do something…that’s the next step.”

Jen, one of Rick’s students who attended the regional science symposium in New Jersey, presented her project on surface temperature (more on that in a moment), but she was also involved—and emotionally connected—to the Four Pole Creek project. “A couple of years ago, in 2015, we had really bad flooding and a 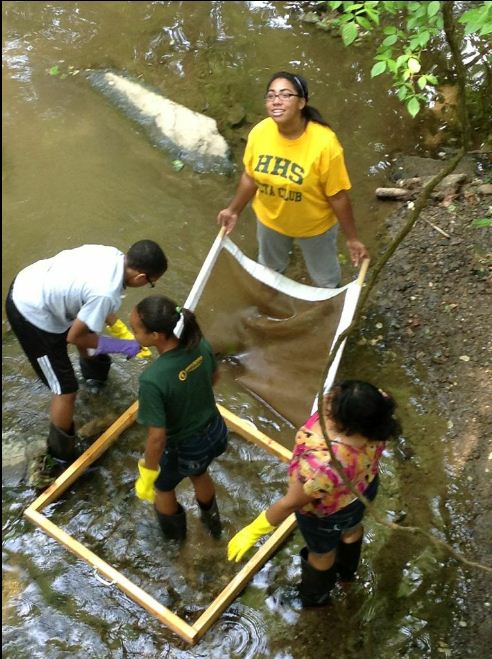 bunch of my friends had houses on the creek. They had to do a lot of cleaning out. Their houses smelled like e-coli. Sanitary policemen came to sanitize their houses completely. Our house had one story and it took three days to clean it out. We had to stay with family members outside of the creek.”

Her experience got almost life-threatening. When Jen attempted to check on her grandfather, who is diabetic, she tried to cross the flooded creek. “That was my first mistake. I’m 5-5 and the creek water came up to my waist.”

Jen’s science symposium trip was a much happier experience. “For my project, we started with a hypothesis about cloud coverage and surface temperature and found that surface temperature affects climate change, the greenhouse effect, and the earth energy budget. We did background research and data analysis. We made a really big poster with data tables of cloud coverage, our research methods, materials used, analysis, and conclusions.” Jen’s team’s unique addition to their presentation to the reviewers was a storybook about their entire research experience.

Now a high school senior, Jen already has an eye on two colleges (University of Kentucky and Marshall University) but, for the first time, she also has a couple of science careers in mind. “I think I will either go into the nursing field or be an environmental science teacher,” she said. “I was never really into it, but with Mr. Sharpe’s class, I see this is a lot of what’s going on.”

It’s hard to convince a teacher, a principal, a superintendent, or a school board to commit to a new idea. Rick Sharpe wishes somebody was there with GLOBE for him on day one. “The benefits are phenomenal. Environmental science can cover 40 or 50 percent of our science standards and GLOBE is the ideal vehicle,” he said.

The NASA connection can change a lot of minds, he adds “When you mention NASA, it’s a magic word with school boards and students…they’re very impressed with that.” Students, especially, like it when they hear that the data they collect goes to real NASA research and exploration.

Beyond the genuine, hands-on science aspect of GLOBE, Rick says there is a democratic sensibility to the program—an accessible-to-all reality—that he finds appealing. “I don’t teach AP science courses. I choose not to, because you have to teach to the test. GLOBE works well with all students, students with learning disabilities, with IEPs. You don’t have to be a private or charter school to participate.”

Another democratic aspect to how Rick operates his GLOBE program: “We select our symposium teams at random…it’s a class effort, not a cherry-picked thing. It’s what’s produced in class. We will refine the presentation for what’s shown at the symposium, but the paper is what students present for their grade.”

Teachers and students get to see what others are doing around the country as well, “in our case, from areas that are more affluent than we are…we can compare our work to work being done by others.” 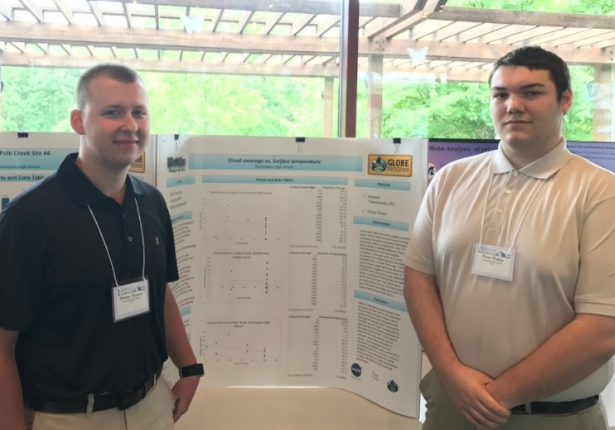 Rick acknowledges the realities that teachers face when entering the GLOBE world: paperwork, class organization, trip logistics to regional symposia, resistance from some administrators. But he adds that it can help to try one thing at a time: “get successful at one thing, and then move ahead.” Rick also said that the United States GLOBE office based at the University of New Hampshire Leitzel Center can be helpful with guidance and financial support. GLOBE teachers are also usually paired with an experienced GLOBE partner as a coach and mentor.

Rick has two projects in mind for the 2018 symposium in his region: more on surface temperature incorporating data collected from the August eclipse, “maybe comparing school data along the path in the 90 percent range.” But, critically, his students will continue their watershed work at Four Pole Creek. It’s “our trademark thing,” Rick says, and perhaps a science project that could prove life-changing for the people of Huntington, West Virginia.

The GLOBE Program is gearing up for its 2018 Science Research Symposia funded by NASA Grant No. 80NSC18K0135.  For information on dates, locations, and application procedures, visit https://www.globe.gov/web/united-states-of-america/home/student-research-symposia.